The more one reads about Jared Kushner, the more intriguing things become.

Kushner, it turns out, was the person responsible for who blocking Chris Christie from consideration for VP, and then (it is believed) purging Christie and denying him any position in the Trump Admin, in any way, shape, or form (no pun intended.)

Why? It must be because of the Bridgegate thing, right? Well, not quite. From a USA Today story back in Nov 2016: 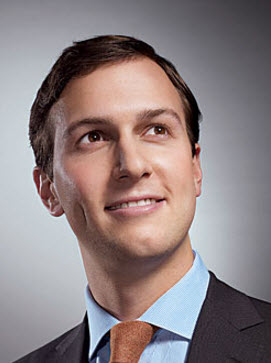 His eyes toward the stars… or Israel?

Seryl and Charles Kushner are the parents of Trump son-in-law Jared Kushner, who reportedly blocked Christie from becoming Trump’s vice presidential nominee and now has led the ouster of Christie allies from the president-elect’s transition organization.

The motive: Christie as U.S. attorney was involved in the prosecution of Charles Kushner, who was sentenced to prison in 2005 on 18 counts of tax evasion, witness tampering and making illegal campaign donations…

When Charles Kushner was sentenced, Christie spiked the football in a press release.

“The court of law was the great equalizer for Mr. Kushner, who had obviously convinced himself that his power, influence and immense wealth put him above the law,’’ Christie said. “We are very pleased that justice was done.’’

When his father had his legal difficulties, Jared Kushhner was interning at then-Manhattan District Attorney Robert Morgenthau’s office. In a 2013 interview with The Real Deal, which covers New York real estate news, Jared Kushner said he changed his career choice because of the handling of his father’s case.

“My dad’s arrest made me realize I didn’t want to be a prosecutor anymore,” he said. “The law is so nuanced. If you’re convicting murderers, it’s one thing. It’s often fairly clear. When you get into things like white-collar crime, there are often a lot of nuances. Seeing my father’s situation, I felt what happened was obviously unjust in terms of the way they pursued him. I just never wanted to be on the other side of that and cause pain to the families I was doing that to, whether right or wrong.’’

That’s right. Jared’s daddy went to prison, ‘Lil Jared got really angry about that, wanted revenge, and then got revenge. My favorite section of Charles Kushner’s Wikipedia entry, though, is the ‘Donations’ section:

Before 2016, Kushner was a donor to the Democratic Party. He serves on the boards of Touro College, Stern College for Women, Rabbinical College of America and the United Jewish Communities. Kushner has donated to Harvard University, Stern College, the St. Barnabas Medical Center, and United Cerebral Palsy. He contributed to the funding of two schools, Joseph Kushner Hebrew Academy and Rae Kushner Yeshiva High School, in Livingston, New Jersey and named them after his parents.

In August 2015, Kushner donated $100,000 to Donald Trump’s Make America Great Again PAC, a super PAC supporting Trump’s 2016 campaign for the presidency. Kushner and his wife also hosted a reception for Trump at their Jersey Shore seaside mansion in Long Branch.

How’s that for MAGA credentials!

From the Jewish Telegraphic Agency (a UPI-type of newswire catering to Jewish ethnocentrism: “Our reporting reflects the wide spectrum of religious, political and cultural identity within the Jewish community”):

That’s a juicy takeaway from Jodi Kantor’s deep dive into the first son-in-law and his relationship with Israel published over the weekend in The New York Times.

Netanyahu has long been a friend of the Kushners, and particularly Jared’s dad, Charles Kushner, a major donor to pro-Israel and Jewish causes. One time, Kantor reports – she doesn’t specify when – Jared gave up his bed and moved to the basement so Netanyahu could spend the night at their home in Livingston, New Jersey…

Here are some other surprising facts from the coverage this weekend of the Jews in Trump’s inner circle.

* A  flagpole at the Joseph Kushner Hebrew Academy, named for Jared’s grandfather, is dedicated to the memory of Alisa Flatow, an alumna who was murdered by terrorists.

Jared Kushner attended the school – then named the Hebrew Youth Academy in Livingston – with Alisa’s younger sister, Ilana. When Alisa, 20, was killed in 1995, in a bus bombing in the Gaza Strip, Jared and Ilana were eighth-grade classmates…

* Jared stopped wearing his kippah when he attended Harvard. The Times reported that Kushner maintained other Orthodox observances at the university – JTA has reported his closeness to the university’s Chabad House – but the head-covering was gone.

* Jared’s dad still looms large in his life. As close as he is to Ivanka’s dad, Jared remains his own father’s son. Charles Kushner joined the meeting in September of Netanyahu, Trump and Jared Kushner, the Times reported…

“He is in almost constant phone and email contact with Otaiba, whom he met last June on the campaign through a mutual friend, the billionaire real estate investor Tom Barrack, one of Trump’s closest friends and the chair of his inaugural committee,” Politico reported.

Trump has tasked Kushner with brokering a Middle East deal, and his friendship with Oitaba jibes with Netanyahu’s agenda of making peace from the “outside in” — i.e., forging ties first with Sunni Arab states, growing closer to Israel because of a shared apprehension of Iran. Kushner also secretly talked Israel with Haim Saban during the campaign, Politico reported. Kushner has long admired the Israeli-American entertainment mogul and backer of all things Hillary Clinton. It’s not clear why Kushner was reaching out to Saban — it didn’t diminish Saban’s support for Trump’s rival.

Kushner has also met with Henry Kissinger, who as secretary of state in the 1970s laid the groundwork for Israel-Egypt peace. Kissinger left the meeting with little clarity about Kushner’s actual role.

Meanwhile, a NY real estate news site report from back in January notes:

George Soros’ Soros Fund Management has quietly been financing the Kushner-backed real estate finance startup Cadre with a substantial credit line, according to sources familiar with the matter.

A source familiar with the financing arrangement told The Real Deal that “Soros has had a long and productive relationship with the Kushner family.” Another source told TRD that Kushner Companies  president Laurent Morali played a key role arranging the financing, but a Kushner Companies spokesperson disputed that account, claiming that “Kushner Cos. has never been involved in Cadre in any capacity.

Cadre, founded by brothers Jared and Joshua Kushner and Blackstone alum Ryan Williams in early 2015, is an online investment platform that connects institutions with real estate deals in major markets like New York.  Cadre generally invests in deals using the credit line before making them available to investors online…

The irony of the Soros-Kushner connection is that Donald Trump’s presidential campaign, which Jared Kushner helped orchestrate, vilified George Soros.