In the pre-internet, pre-cable-TV days of 1977, all we had in my household growing up was TV Guide. Before ‘Star Wars’ came out, I was perusing an issue of the magazine, and towards the back of the issue I came across a full-page, glossy advertisement for the movie. I knew nothing about the film, nor what it would be about, but the visceral experience I had, just looking at this poster (the iconic “Style A” poster painted by Tom Jung) is one of those childhood experiences I’ll never forget.

The images in that poster grabbed me, resonated with me profoundly, and pulled me in. I *had* to see whatever this movie was about. (I was 9 years old at the time.)

The collective images — Luke’s heroic pose, with arms stretched high and light saber in hand; Princess Leia at Luke’s feet, like something from a Frank Frazetta drawing; and that oversized image of Vader’s head signaling quite strongly (I now believe) the presence of a Shadow figure.

To this day, I believe that poster was a distillation of the film, and that both artifacts tapped into Jungian archetypes and Campbell’s notion of the monomyth (both of which Lucas was greatly influenced by.) Insofar as one believes in the existence of a collective unconscious, this poster’s effect is a paragon example. 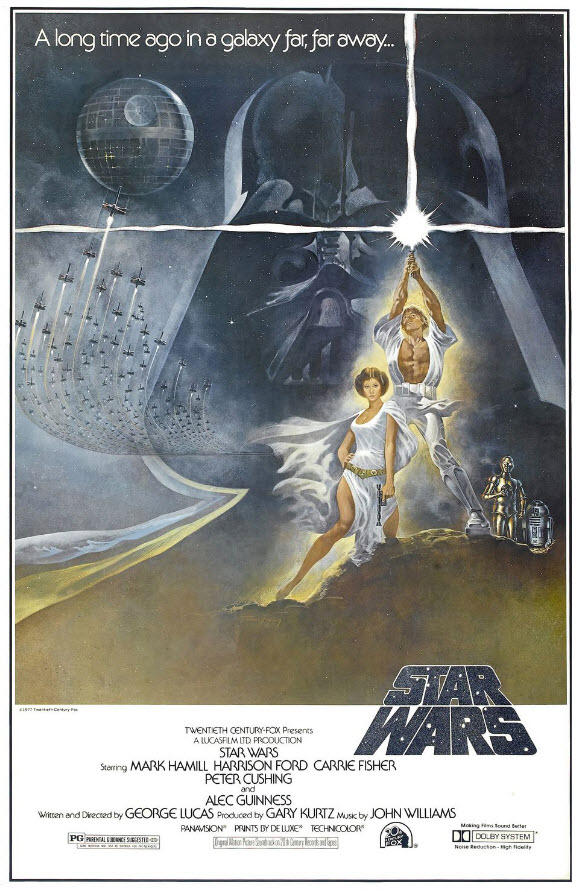 This entry was posted in Culture, Film. Bookmark the permalink.