I happened to be flipping through the channels the other night and came across a PBS POV series episode called Iris, about Iris Apfel. From the PBS page is this synopsis: 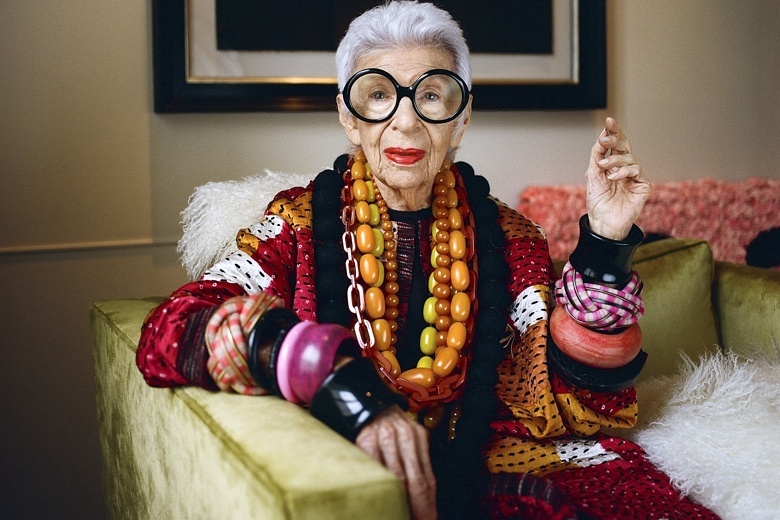 Iris pairs the late documentarian Albert Maysles (Grey Gardens, Gimme Shelter), then 87, with Iris Apfel, the quick-witted, flamboyantly dressed 93-year-old style maven who has had an outsized presence on the New York fashion scene for decades. More than a fashion film, the documentary is a story about creativity and how a soaring free spirit continues to inspire. Iris portrays a singular woman whose enthusiasm for fashion, art and people are her sustenance. She reminds us that dressing — and indeed, life — is nothing but a grand experiment. “If you’re lucky enough to do something you love, everything else follows.”

Apfel is a walking stereotype of the gaudy Park Avenue Jew, and if watching this documentary leaves you with one lasting word or image, it might be: gaudiness.

Physically, Apfel is a not an attractive woman, her Semitic features most pronounced with her advanced age, and her requisite whiney Jew accent and constant state of anxiety conjuring an image of Woody Allen in drag.

Her husband appears as a sort of devoted stooge, an equally stereotypical NY Jew who serves as unfunny comic relief. He also serves the role of cuckholded mannequin for Iris, regularly tasked with displaying his wife’s awful style. We see him in a wheelchair, wearing bright pants covered with a floral pattern, or wearing a bright red baseball cap embroidered with what seems to be two fistfuls of marble-sized gold studs.

In one sequence early in the film, we see a gay black fashion designer pushing Apfel in a wheelchair as he takes her into a tiny, hole-in-the-wall, clothing and accessory shop in Harlem. Apfel praises the African styles of Harlem, the gaudy colors and clunky jewelry being tribal styles she herself has quite successfully ‘culturally appropriated’ into pastiche from the very blacks she now deifies or otherwise employs as maids, drivers, or assistants. Despite being fantastically wealthy — she lives in a 3-bedroom Park Avenue apartment and also has a black-housemaided apartment at Palm Beach Towers (where else) – we witness her haggle with the African-immigrant-accented, black shop owner relentlessly. And we’re talking about haggling a $10 bracelet (in traditional pan-African colors) down to $7, that sort of thing.

The theme of cultural appropriation and Jewish parasitism extends to Apfel’s initial foray into the vacuous world of ever-meta conspicuous consumption (aka ‘fashion’) where we learn she got her initial success from culturally appropriating medieval European tapestry designs and making them into wallpaper designs for wealthy New Yorkers. At one point in the film, there’s a moment of hilarious irony as Apfel bemoans the state of today’s younger designers, complaining how they don’t even stitch or make their own fabrics! And this is coming from a woman who essentially made a boatload of shekels by ripping off pre-existing styles. A second irony here is that the fashion mavens she bemoans are part of the logical trajectory of the vacuous fashion industry itself: an endpoint of pure marketed image, devoid of creative talent.

Whether it’s the fashion designer who can’t sow or the fabulously wealthy huckster who has underpaid assistants creating his ‘art’, locales like Manhattan are the epicenters of our contemporary, debased, neo-Weimarian era, and figures like Iris Apfel are among its grotesque and celebrated elder pioneers.

This entry was posted in Culture, Jewish. Bookmark the permalink.