Earlier this week, the NYT had a perfectly Orwellian headline “Trump Blames Both Sides in Virginia… Abandons Measured Tone”, and today CNN has shown they’re up to the challenge of creating an even more Orwellian headline (hat tip: MB). 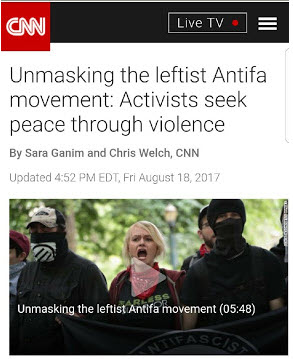 From the CNN piece:

Antifa activists, who operate without any centralized leadership, told CNN that their goal is peace and inclusivity. They often denounce capitalism and government. Since Trump entered the world stage, they’ve condemned his push to tighten immigration rules and what some view as his tendency toward racism.

While Antifa members don’t fit a single category, they say many are millennials and many live on society’s fringes: undocumented immigrants, transgender people, low-wage workers, those who don’t conform to the traditional 9-to-5.

They’re not 9-to-5-ers? Imagine my surprise.

And their methods are often violent. Antifa leaders admit they’re willing to physically attack anyone who employs violence against them or who condones racism — as long as force is used in the name of eradicating hatred.

Everyone on the right is Hitler 2.0.

Antifa members also sometimes launch attacks against people who aren’t physically attacking them. The movement, Crow said, sees alt-right hate speech as violent, and for that, its activists have opted to meet violence with violence.

Because Alt right speech is ‘violence’, real actual violence from the Left is not only justified but is morally presribed.

This entry was posted in Left, MSM. Bookmark the permalink.