Time has a story on “Divided Democratic Party Debates Its Future as 2020 Looms”:

Ignoring that struggle has caused headaches in the heartland. Today only 28% of House Democrats hail from states that don’t touch the Atlantic or Pacific oceans, down from 37% in 2007. The survivors have tried to distance themselves from the party’s leftward drift. “When I’m back home, I’m not talking party issues,” says Representative Ron Kind, an 11-term Democrat from La Crosse, Wis., whose Capitol Hill office features pictures of him hunting. “I’m not on the stump bashing Republicans.”… 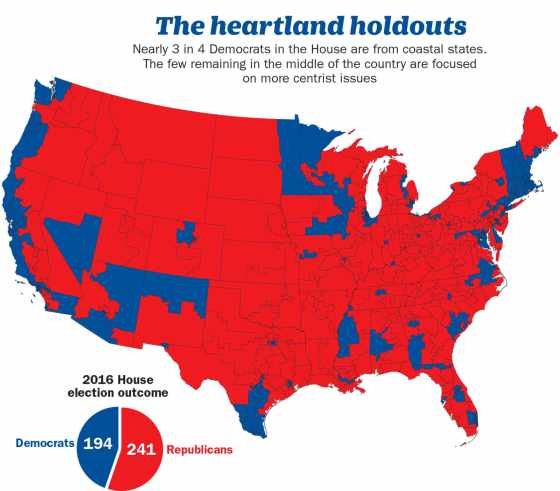 For the White Death states, the trajectory is against Dems. Take, for example, West Virginia:

Governing in Washington these days is “the most frustrating thing I’ve ever done,” complains Senator Joe Manchin, a West Virginia Democrat. “Most of my life, there was about 20% on the right fringe and the left fringe, but 60% in the middle, where common sense would prevail. Now I’m thinking 40% on each fringe.”

Part of the problem is that red states are getting redder, while blue states are growing ever more blue…

Democrats still outnumber Republicans in West Virginia by 12 percentage points. These Democrats, however, don’t want to hear about NFL players protesting during the national anthem or the latest in the ongoing investigation into Trump’s alleged ties to Moscow. They care far less about Black Lives Matter than keeping their checking accounts in the black. Add in the 21% of West Virginians who say they don’t identify with either party, and it’s a dangerous proposition for candidates like Manchin to parrot talking points from MSNBC. It’s not that he’s a squish on cultural issues; it’s that he’d rather talk about lifting the economy in his state, where 18% live in poverty.

The Democrats’ focus on identity politics is one reason Manchin suggested, half-heartedly, that he doesn’t care if he wins another term next year. “The Washington Democrats’ mentality has been more urban,” he says. “They forgot about rural America and rural states. They don’t want you to tell them about their bathrooms or their bedrooms or all this other stuff we’re trying to control.”