Hipster racism is one of the latest, and certainly not the last, creative ways in which non-white, Grievance Culture types seek to exert power and authority by marginalizing and humiliating gullible whites. It is, at the heart of the matter, a redefinition of ‘racism’ to become pure, unadulterated, anti-white animus. In the near future, there will be other, more imaginative, faux-specific forms of ‘racism’ that will make yesteryear’s phantom notions of ‘institutional racism’ seem like phlogiston. But for now one has hipster racism.

In The Guardian, one Arwa Mahdawi asks “Is Lena Dunham’s ‘hipster racism’ just old-fashioned prejudice?” Without going into the torturous details of the Lena Dunham-related incident, Mahdawi gives us the term’s origins:

In a statement which went viral, the writer Zinzi Clemmons talked about how, as a student at Brown University, she’d known a lot of people who’d moved in the same circles as friends of Dunham. Wealthy, well-educated liberals, with parents who were influential in the art world.

“Back in college, I avoided these people like the plague because of their well-known racism,” Clemmons wrote. “I’d call their strain ‘hipster racism’.”

You may have heard the term before. It’s been around for over a decade and seems to have been popularized by an article by Carmen Van Kerckhove in Racialicious. The article noted that hipster racism is “a trend we noticed back in 2005, at the height of the Kill Whitey parties”. In case they mercifully passed you by, they were ironic dance parties in Williamsburg, a then rapidly gentrifying part of Brooklyn, at which white hipsters parodied black hip-hop culture in order to “kill the whiteness inside”.

The Kill Whitey parties are no longer a thing. The same can not be said of hipster racism – it is deeply embedded in popular culture.

I had never heard of Kill Whitey parties, but then again I’m sure there are even more extreme forms of prostration before the Hip Hop Godz of pop culture taking place today, that I’ll learn about in a few years.

Cue the progressive ‘with it’ academic to flesh out the ‘context’ and provide us with some examples:

But what is this hipsterised racism, and how would we recognise it? Rachel Dubrofsky, a communications expert at the University of South Florida, told the Guardian that hipster racism is the “domain of white, often progressive people who think they are hip to racism, which they mistakenly believe gives them permission to say and do racist things without actually being racist”.

“Some of the most popular white women comedians are terrible hipster racists,” Dubrofsky says. In August, for example, Tina Fey appeared on Saturday Night Live to talk about white nationalists marching on Charlottesville – which she did while making a joke about Thomas Jefferson raping his 14-year-old slave, Sally Hemings, calling her “that hot, light-skinned girl over by the butter churn”. Amy Schumer is known for making jokes like: “I used to date Hispanic guys, but now I prefer consensual.” Sarah Silverman has worn blackface on a number of occasions; she has since said publicly she deeply regrets it.

Given the tsunami of post-Harvey Weinstein career implosions, due to various definitions of ‘sexual assault’, it is only natural that the virus of Political Correctness should next spread itself into career implosions due to expressions of unconscious racism.

Hipster racism doesn’t just present itself in off-colour humour; you can see it in the way certain on-trend types fetishize other races. A mixed-race employee at Vice Media told me, for example, about a white executive in her office who routinely uses people of colour as props to make him seem “cool”. He often tries to banter with her about hip-hop, for example, assuming that she is obviously into hip-hop because she is half-black.

“There was one time,” she recalls, “when he wanted to have a business dinner for cool creative people and the invite list was all brown people. It made us feel like pets.”

Hipster racism is thinking that you can use someone else’s culture as a prop. 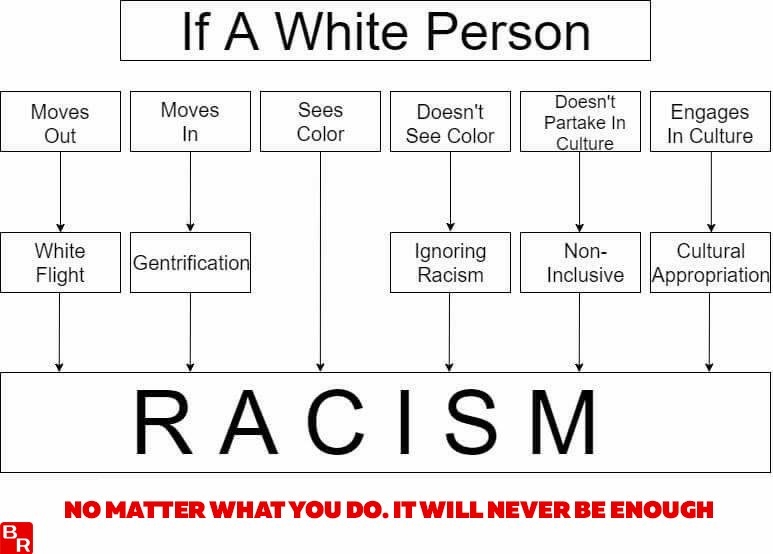 And then there is the New Moses:

Another pervasive example of hipster racism is the staggering number of white people who don’t seem to understand that there is no ironic way to say the N-word if you are not black. Earlier this month, the author Ta-Nehisi Coates was asked at a panel about whether it was OK for white hip-hop fans to rap along when they hear black rappers use the N-word in songs. As he eloquently explained: no, it’s not.

“When you’re white in this country you’re taught that everything belongs to you,” he said. “You think you have a right to everything.”

What a sad and empty existence it must be for progressive, self-hating whites who dutifully receive instructions on appropriate social behavior from the likes of Ta-Genius Coates.

We then enter the domain of pure unfalsifiability when more SJW academics (is there really any other kind?) pontificate further about how racism permeates the ether:

Hipster racism is a racism that is in denial about its racism. However, that is also true of racism in general. As Ibram X Kendi, a professor at American University in Washington DC, told the Guardian: “The expression of racism is to fundamentally deny its expression.”…

Hipster racism may be a 21st-century term, but progressives inadvertently perpetuating racism while supposedly challenging it has been happening for centuries. In his book, Kendi chronicles the history of “assimilationist ideas – these are ideas that consider themselves to be well-meaning – they reject a biological hierarchy but believe in a cultural or behavioral hierarchy.” Abolitionists, for example, thought slavery was wrong but also believed it had turned black people into brutes and therefore advocated the civilizing of black people.

In the 20th century, the 1965 Moynihan report famously pathologized black families, arguing that the problems many African Americans were facing were down to the instability of their family structures. This idea persists, that broken black families are to blame for racial inequality in America. You can see it, for example, in a 2015 New York Times op-ed about the Baltimore riots in which David Brooks wrote: “The real barriers to mobility are matters of social psychology, the quality of relationships in a home and a neighborhood.”

Such is the SJW’s mind that David Brooks, of all people, is seen as a racist.

This entry was posted in Anti-White, Cultural Marxism. Bookmark the permalink.