I thought the ADL and $PLC was enough. But, no, the threat of extremism is so dire we need more ‘extremism-combatting’ orgs. In The Hill, David Ibsen, executive director of the Counter Extremism Project, pens an op-ed titled “A call to arms for tech companies: Get extremists off your platforms”.

Ibsen calls for proactive measures by tech giants to deplatform extremists, citing 4 example of ‘extremists’ that it is morally imperative for Silicon Valley to deplatform:

The new Guide to Online Propagandists rom my organization, the Counter Extremism Project, highlights more than a dozen radical propagandists whose hateful rhetoric remains freely accessible across social media platforms. These include:

Yusuf Qaradawi, a Muslim Brotherhood ideologue who has justified suicide bombings and the killing of Islamic apostates. Qaradawi lives in Qatar under the government’s protection. Qaradawi’s name returns more than 10,000 results on YouTube.

Ahmad Musa Jibril, a Michigan-based Islamist preacher popular with ISIS fighters and supporters. Though Jibril has retreated from his social media accounts in recent years, the accounts remain active and his name still returns more than 1,000 hits on YouTube, including two channels devoted to him. Khuram Butt, one of the perpetrators of the June 3, 2017, London Bridge terrorist attack, reportedly was radicalized by watching Jibril’s videos online.

Nathan Damigo, founder of the white nationalist movement Identity Evropa. Damigo has called for the preservation of white European culture, which he believes is under attack from the forces of multiculturalism. He has appeared alongside noted white nationalist Richard Spencer and spreads his xenophobia messages to university campuses. Damigo stepped down as leader of Identity Evropa last year, but he maintains an active presence on YouTube, where his own channel has almost 4,000 subscribers, and Twitter, where he has almost 20,000 followers.

In case the message isn’t clear enough, here are the other faces as displayed on Ibsen’s aforementioned site. Spot the two anomalies: 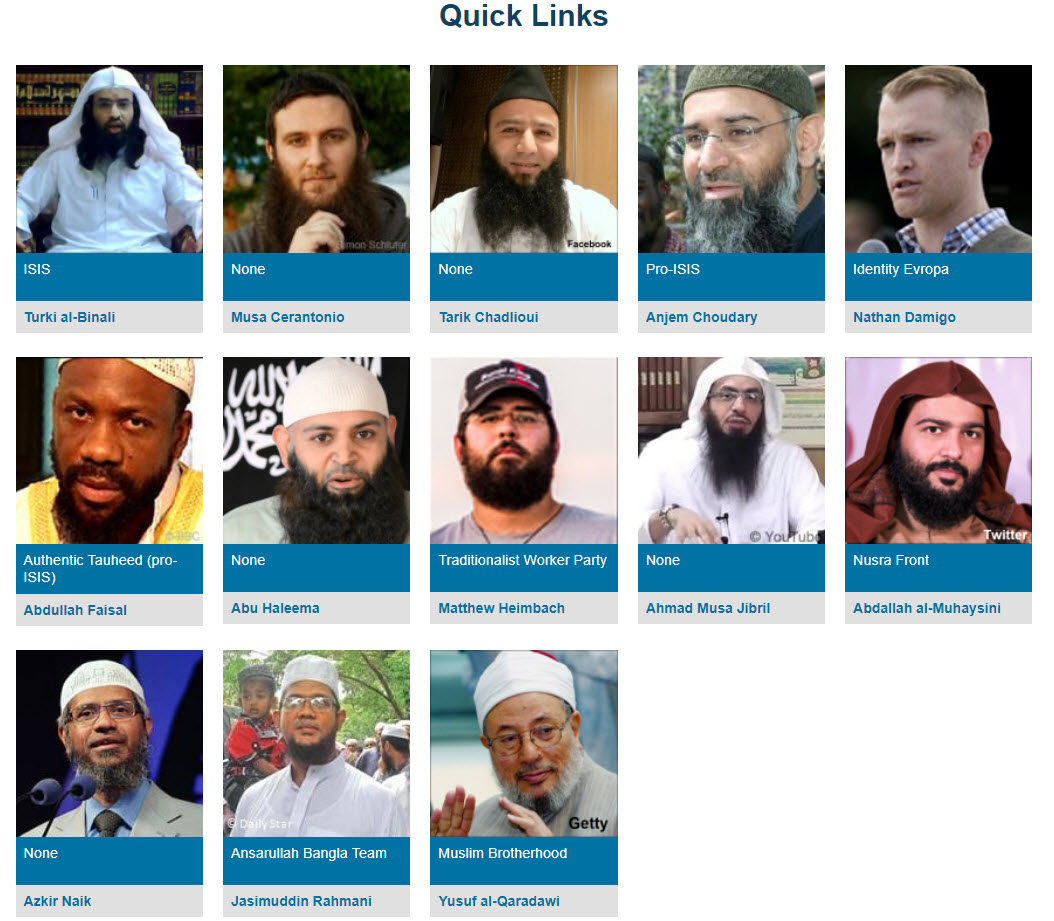 White identitarianism is under attack. In a perverse display of moral relativism, having a healthy sense of pride in one’s race and cultural achievement (for whites only, not for **** or non-whites) is being equated with Muslim extremism.

This entry was posted in Anti-White, Cultural Marxism, Culture Wars. Bookmark the permalink.