When Felix Yz was three years old, a hyperintelligent fourth-dimensional being became fused inside him after one of his father’s science experiments went terribly wrong. The creature is friendly, but Felix—now thirteen—won’t be able to grow to adulthood while they’re still melded together. So a risky Procedure is planned to separate them . . . but it may end up killing them both instead.

This book is Felix’s secret blog, a chronicle of the days leading up to the Procedure. Some days it’s business as usual—time with his close-knit family, run-ins with a bully at school, anxiety about his crush. But life becomes more out of the ordinary with the arrival of an Estonian chess Grandmaster, the revelation of family secrets, and a train-hopping journey. When it all might be over in a few days, what matters most?

Told in an unforgettable voice full of heart and humor, Felix Yz is a groundbreaking story about how we are all separate, but all connected too.

Most notable among the supporting cast is his gender-fluid grandparent Grandy, who alternates among male, female, and no presentation depending on the day of the week. Grandy’s presence allows for an explanation of choosing one’s own pronouns (here: vo, ven, veir, veirs, veirself) and offers, along with the biracial Hector, more ways for Felix to better understand how all people contain multitudes.

About the book’s author: 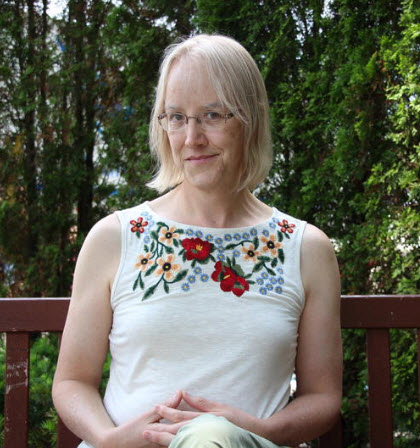 Lisa Bunker has written stories all her life. Before setting up shop as a full-time author and trans activist she had a 30-year career in non-commercial broadcasting, most recently as Program Director of the community radio station in Portland, Maine. Besides Maine she has made homes in New Mexico, southern California, Seattle, and the Florida panhandle. She currently lives in Exeter, New Hampshire with her partner and her cat. She has two grown children. When not writing she reads, plays piano, knits, takes long walks, does yoga, and studies languages. She is not as good at chess as she would like to be, but still plays anyway. Her author website is at www.lisabunker.net, and you can find her on Twitter @LisaBunker.

Lisa Bunker is a transgendered ‘woman’:

I would say my status as a transgender person is one facet, among many, of who I am. Of course it matters, it’s had a big impact on my life and the arc of my life, but it doesn’t define me. You can’t say, oh, Lisa Bunker, she’s trans, and have that explain me any more than my faith, or my nationality, or how tall I am, or the color of my eyes, or anything else.

So yes, writing stories featuring LGBTQ characters without that being the main point, and without shaking a figure and lecturing at the reader or anybody else. It’s just a thing about Felix, and his grandparent is genderqueer, and his mother is bisexual, and there are a couple of other LGBTQ characters as well in this story…

For my little family of three, myself and my two children, and my partner two, so I am a transgender woman, I am engaged to be married to another woman. I have two children, one of whom is genderqueer, doesn’t identify as either male or female and uses the pronouns they or them, and then I have my son who is the only cisgender heterosexual person, our token straight kid.

This is how it happens, how Culture changes to Weimar 2.0. Books like this (intended for children) are authored, published, then gushed over and promoted by liberal culture-influencers. By the time Boomer conservatives (and conservative parents) are aware of it, it is too late to provide a counter-narrative.

And there is no counter-narrative, not in the form of a children’s book. Such a book would be a Hate Book, written by a Nazi who is literally Hitler.

This entry was posted in Cultural Marxism, Culture Wars. Bookmark the permalink.