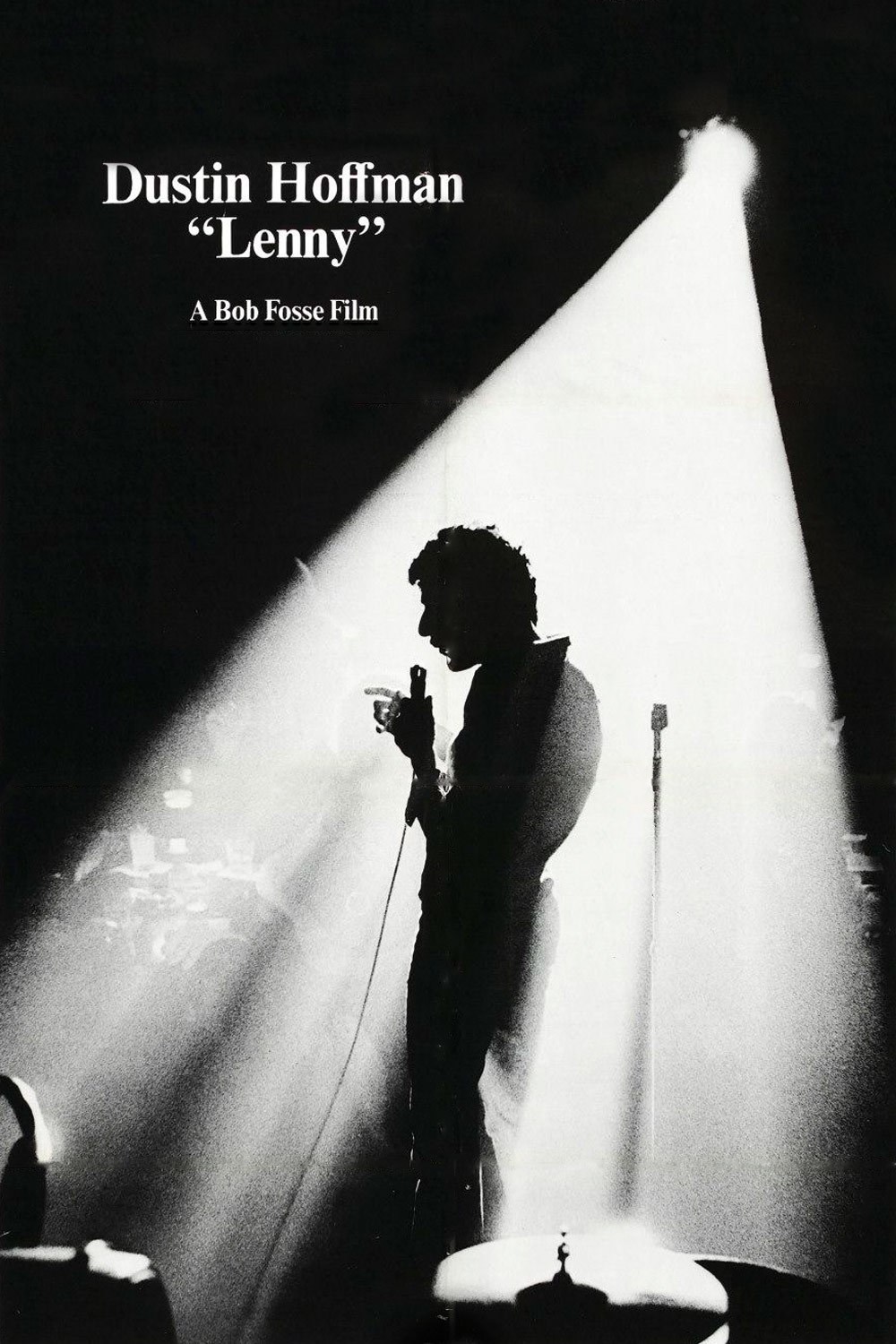 Lenny (1974) is Bob Fosse’s well made, black and white biopic of Lenny Bruce (born Leonard Alfred Schneider), which is itself based on a play by Julian Barry. Dustin Hoffman does a terrific job channeling the manic energy of Lenny, and Valerie Perrine is equally terrific as Honey, the former stripper and “shiksa goddess” whom Lenny becomes obsessed with and eventually marries. (For her performance, Perrine won the Best Actress award at the 1975 Cannes Film Festival). The film cuts back and forth in time, from the events of Lenny’s life to the ‘present day’, where various people from his life are talking to an off-screen interviewer.

Having failed with his comic act based on impersonations and standard one-liners, Lenny transitions into a profanity-laden, improvisational, and confessional style of blue ‘humor’ that became a major countercultural force of the era, and which proved hugely influential to later comics such as Richard Pryor and George Carlin. Rhythmically, Lenny fancied his act as the linguistic equivalent of be-bop jazz musicianship. In terms of his subject matter, Bruce represented the quintessential urban, liberal Jew who revels in being the fly in the ointment, who gravitates towards deviancy and subversion.

Regarding the depictions of his act, of particular note is his Jews-as-Christ-killer bit, and a later bit where he’s criticizing a Time magazine profile that called his act “sick humor”. Of the latter, he says what is “really sick” is Zsa Zsa Gabor making $60,000 a week in Las Vegas, while the average school teacher in NV makes only $6,000 a year. But, as is soon revealed, he admits that his liberal virtue-signaling on the matter is just that… virtue-signaling. In the same act, he says “I’m not a moralist,” while the film intercuts to images of his newfound wealth in the Hollywood hills. He tells the crowd “I’m a hustler. If they give it, I take it!”

He repeatedly cheats on his “shiksa goddess” wife with various other women. The one woman shown is another blond WASP-looking nurse at the hospital where his wife was recovering from a car accident. His wife later speculates to the interviewer that he cheated on her repeatedly due to his need “to prove himself… due to his insecurities.” (There is a disturbing scene where he’s engaging in a threesome with an attractive bisexual woman, his wife and himself. The scenario has clearly been manufactured by Lenny; we later see his wife crying, saying that he “talked her into the freak scene.”)

Lenny’s mother is depicted throughout as a staunch (and rather unscrupulous) defender of his act, as well as an active participant and promoter of his career, in a quasi business manager capacity. She even managed the finances at the strip clubs where he worked. She says something to the interviewer about how if a Protestant mother moved to California to help her son “you wouldn’t call her Protestant. Well I’m a Jewish mother.”

Lenny’s multiple obscenity charges became a major turning point in his life. After each such arrest, his subsequent acts became less a comedy routine and more a series of obsessional riffs on his cases (“You need the deviant!”), his martyrdom, and testing the limits of public tolerance. As with many other Jewish culture producers (e.g., pornographers; the soft pornography of 1970s-era Hollywood, etc.), Lenny hid under the pretext of the First Amendment, exploiting it for all it is worth.

And, as with many of these aforementioned Jewish culture producers, he was an ‘extreme’ personality: neurotic, paranoid, narcissistic, excessive in ways of the flesh.

This entry was posted in Culture, Film, Jewish. Bookmark the permalink.