The Professor & The Student

I refer to Thomas Nagel often in this blog, and his seminal “What Is It Like To Be A Bat? article singlehandedly launched the New Mysterians movement in philosophy of mind, but my absolute favorite New Mysterian philosopher is Colin McGinn. (A good mainstream article he recently wrote is here.) He has long been, in fact, my favorite living philosopher. His thesis of ‘cognitive closure’ takes Nagel’s position and teases out some logical conclusions from it. As I previously wrote:

I lean heavily towards the position that there are certain areas of experience and intuited knowledge that are impossible of a strictly scientific translation. For example, like the contemporary philosophers Thomas Nagel and Colin McGinn have so powerfully argued, the very nature of consciousness (i.e., that subjective experience of being “me”, or what philosophers call ‘qualia’) may be phenomena wherein physical brain states are a necessary but not sufficient condition for the subjective experience of consciousness itself. In other words, consciousness necessarily involves properties beyond the brain-states we are able to observe in the laboratory. As experiential (phenomenological) qualities not reducible to observable brain-states, such properties need not be supernatural qualities per se but perhaps noumenal facets of a natural reality that we, as human beings necessarily constrained to five senses and finite categories of conceptualization, are simply cognitively closed off from. (This is McGinn’s argument.) Kant really got the ball rolling with all this, with this radical conceptual reformulation.

This approach in philosophy of mind – the philosophical idea that no future laboratory will ever be able to fully account for conscious experience X by equating it with neurological brain-state Y, because the very presumption of what such a materialist theory of mind-brain identity hopes to accomplish is a priori flawed – has become referred to, in philosophical circles, as ‘New Mysterianism.’ For me anyways, it’s one of the most exciting developments in contemporary philosophy of mind, one that discerns the explanatory limits of scientific reductionism, without rejecting wholesale the scientific enterprise ala postmodernism. (Nagel’s seminal 1974 article “What Is It Like To Be A Bat?”, which can be found online, argues this point wonderfully.)

Colin McGinn takes Nagel’s argument one step further (most convincingly, in my estimation), arguing that while consciousness is itself a product of nature, we are nevertheless closed-off a priori from complete epistemological knowledge of the constituents of consciousness. In the same way that a cat, for example, cannot understand abstract mathematics, so we humans cannot reach a complete understanding of consciousness. McGinn agrees with Nagel’s thesis that there may be properties we can never fully grasp, but goes further than Nagel in asserting that there are properties of things we can never fully grasp, ever. “[N]o spatial property will ever deliver a satisfying answer to the mind-body problem,” McGinn writes. Following the general form of Kant’s transcendental argument, McGinn deduces ineffability with respect to secondary properties of things as part of the noumenalistic elements of nature, i.e., those elements that lie outside of human comprehension: “[T]o be is not to be conceivable by us…. [T]he mind-body problem provides a demonstration that there are such concept-transcending properties… [T]he limits of our minds are just not the limits of the reality. It is deplorably anthropocentric to insist that reality be constrained by what the human mind can conceive.”

Today I find out McGinn has been embroiled in a campus ‘sexual harassment’ scandal (ahem) which has ended his time at the University of Miami. (McGinn is much better than that University, but landed there some years back for the weather and his love of the beach.) 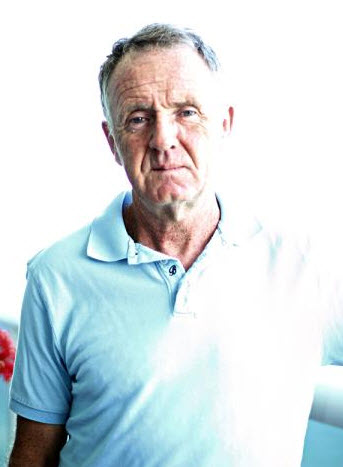 In Slate, of all places, Katie Roiphe writes an account somewhat sympathetic to McGinn, if only insofar as how liberally applied the term ‘sexual harassment’ is on college campuses. She begins her article “The Philosopher and the Student” with:

When I Skype with Colin McGinn in September he is sitting on the floor in an empty room. The reason for this is that he is moving, but the emptiness has larger resonances: He has lost his job, his reputation, his income, his stability.

Colin McGinn comes from a long line of coal miners without a history of university degrees, and somehow worked his way to Oxford. After going on to win prestigious awards, write acclaimed books, form a group of philosophers called the “New Mysterians,” and garner plum academic appointments, including his latest at the University of Miami, the famous philosopher of mind has lost everything because of a 26-year-old woman.

Roiphe then goes over all the known, public facts about the case before concluding:

The questions here enter foggy territory that would take true philosophers or maybe novelists to navigate: Should a man, even an arrogant man, lose tenure and a long, lustrous career over what was probably a blundering excess of attachment, a burst of infatuated blindness? His mistake was that he was romanticizing what was happening, was carried away by an idea, by a feeling, and did not take the sensible or professional steps…

What happened in the halls of the philosophy department at the University of Miami is much messier and more ambiguous and dingy and depressingly human than the glamorous black and white of the political language—sexual harassment. There is no arrogant, successful man sending dirty missives, no innocent, wronged victim to rally around; instead there is a whole complex swamp of motives and hopes and judgments and desires and ambitions, many conspicuously, spectacularly ill-advised, and there is a little bit of human warmth.

Roiphe’s relatively nuanced analysis of the case is in marked contrast to just about every other media account of the McGinn Affair, where McGinn is simply assumed to be the ‘bad guy’… because, you know, he’s a 61 year old white guy and the ‘victim’ is an innocent, dewy-eyed, 26 year old, female graduate student.

From a NYT article on the story (written by a female writer who clearly doesn’t like McGinn):

Two open letters, posted online in mid-July and signed by more than 100 philosophers, including a majority of Mr. McGinn’s colleagues at Miami, criticized some of the posts on his blog as “retaliation” against the student…

Said letter is chock full of ‘Women’s Studies’ professors and the like, which leads to the need to understand just how unusual some philosophy departments are, within the context of the rest of the departments on campus.

In a nutshell, postmodernist leftists dominate every humanities- and social sciences-oriented dept on any given campus. The one exception, on some campuses, might be the Philosophy Dept. Even there, in some depts Continental-influenced leftie pomos might hold spots, but in terms of ‘analytic philosophy’ (e.g., logic, metaphysics, ontology, epistemology, etc.), it’s still a white man’s game. (This is likely because western philosophy has typically been a field almost exclusively the domain of white males, due to the transcendence-seeking and truth-seeking nature of the subject, not any prohibition of other demographics from being able to make the next great discovery in philosophy of mathematics.)

This being the case, 99.9% of the rest of the campus professors are going to have a grudge against the ‘white male power structure’ still hanging on in the tiny Philosophy Dept down the hall. The NYT piece continues:

Whatever the facts of the case, many philosophers say that the accusations of misbehavior against Mr. McGinn are the edge of a much bigger problem, one that women have long been unwilling to discuss publicly, lest it harm their careers.

Many credit the blog What Is It Like to Be a Woman in Philosophy?, which in 2010 began posting anonymous stories of harassment, with helping to highlight the issue. “Just about every woman you talk to in philosophy has experienced first- or secondhand some form of sexual harassment that is egregious,” said Gideon Rosen, a philosopher at Princeton. “It’s not just one or two striking anecdotes.”

There are signs that the publicity surrounding the McGinn case may be encouraging more women to step forward. Both Ms. Saul and Peggy DesAutels, a philosopher at the University of Dayton and a member of the American Philosophical Association’s Committee on the Status of Women, said that in recent weeks they had each heard from several graduate students who were considering filing complaints.

But changing the broader culture of philosophy to make it more woman-friendly, many say, is a daunting task — particularly since no one can agree on the root cause of that unfriendliness.

The political correctness on a college campus is really unparalleled in American society. To give you an idea of just how wretched the cultural marxism is on the nation’s campuses:

In July, after the sociologist Kieran Healy published a study showing that women made up less than 4 percent of top citations in leading philosophy journals since 1992, the Stanford Encyclopedia of Philosophy sent out an e-mail asking contributors to make sure that entries do not cite work by white men on a given topic while ignoring prior contributions by women and other underrepresented groups.

When it’s all said and done, on his blog McGinn cites his ‘Reasons for Resignation‘:

1.      The rules of the university allow the president to overrule the findings of the faculty senate committee that investigates cases of alleged misconduct, and I believed this was very likely in my case. The university had repeatedly demanded my resignation and clearly wanted me to leave. They had all the power and I had none.

2.      I had no desire to remain in a place I had come to hate. How long would I want to stay anyway, given this fact? I was also disappointed with most of my colleagues.

3.      I did not want to have to keep paying my lawyer at exorbitant rates for several more months.

4.      I was concerned about the effects on my wife’s physical and mental wellbeing.

5.      I wanted to spend more time with my son and grandchildren in England.

6.      I have been a professor for forty years (I am sixty-three) and wouldn’t mind spending the rest of my life reading the books I want to, writing, and playing more tennis.

7.      I was sick and tired of the whole thing and just wanted not to have to think about it anymore or waste any more time on it.

8.      I had books to write that I wanted to get on with, instead of spending who knows how long fighting with the university.

9.      I felt insufficiently intellectually stimulated in Miami anyway. None of this means I wouldn’t consider a position elsewhere, but it seemed pointless to waste time and money trying to keep my job at UM with the cards so stacked against me and my own attitudes toward the place become so negative. Who wants to stay in a place that has asked for your resignation?

This entry was posted in Academia, Cultural Marxism, Philosophy, Philosophy of Mind. Bookmark the permalink.