This seems to be a weekly event:

The man accused of killing two Good Samaritans who tried to help him on a Montana roadside was encountered by immigration authorities earlier this year after a burglary arrest, but was unable to be deported because he had already gotten legal status, federal authorities said this week…

Jesus Yeizon Deniz Mendoza, an 18-year-old Mexican man, has been charged with the killing of Jason and Tana Shane, who saw him stopped on the side of the road Wednesday and tried to help him. When they showed up on the scene with their daughter, Mr. Deniz pointed a gun at them and demanded money, according to an FBI affidavit filed in the federal court case.

They Shanes said they didn’t have any money and Mr. Deniz started to walk away, but then changed his mind and shot the father, then the mother and then the daughter, who was by this time running away. She managed to escape, though not before being shot in the back, the FBI affidavit said.

Mr. Deniz is Mexican, and the Obama administration deems him a legal permanent resident who entered the country legally on May 31, 2013 — though they didn’t say how he earned that status initially.

Indeed, just a month ago Mr. Deniz was arrested by police in Worland, Wyo., on burglary charges. U.S. Immigration and Customs Enforcement officers were informed, but they couldn’t do anything because he was a permanent resident, and his crime didn’t rise the level of being kicked out of the country.

Mexico is a caste society, with white-skinned, Castilians the ruling class. (Notice the skin color of every Mexican Presidente.)

The Indians of Mexico, the ones with violent Aztec blood running through their veins, are the high-fertility, highly illiterate Mestizos who invariably jump fences to get to the U.S.

Imagine this being the last face you see before you and your family are made into road kill with a .22 calibre rifle. 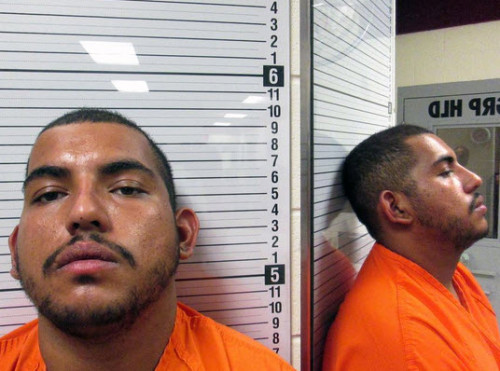