As I’ve noted before, oftentimes it’s difficult to tell apart a real pomo article vs. something spit out by the Postmodern Generator (simply refresh the page for a new pomo abstract.)

NY Mag has a profile of Judith Butler, the “radical theorist who spawned a gender-queer nation — and became a pop celebrity in the process.” The gist of Butler’s oevre:

Gender Trouble, published in 1990, made Butler a star: It introduced “performativity,” the idea that gender isn’t something we are but something we continually do, opening the door for “cultural configurations of sex and gender [to] proliferate,” as she put it in the book’s conclusion, “confounding the very binarism of sex, and exposing its fundamental unnaturalness.” If not for Butler’s work, “you wouldn’t have the version of genderqueer-ness that we now have,” says Jack Halberstam, a gender-studies professor at Columbia. “She made it clear that the body is not a stable foundation for gender expression.”

For much of her career, Butler was known mostly within academia, in part because of the difficulty of her prose.

That last sentence is quite the understatement.

I was looking for it, and, yes, the profile does mention how Butler’s obscurantist prose, the quintessence of postmodernism, won the 1988 “Bad Writing” contest held by the journal Philosophy and Literature. Butler won for this one (uninterrupted) sentence:

The move from a structuralist account in which capital is understood to structure social relations in relatively homologous ways to a view of hegemony in which power relations are subject to repetition, convergence, and rearticulation brought the question of temporality into the thinking of structure, and marked a shift from a form of Althusserian theory that takes structural totalities as theoretical objects to one in which the insights into the contingent possibility of structure inaugurate a renewed conception of hegemony as bound up with the contingent sites and strategies of the rearticulation of power.

Needless to say, Butler was a HUGE figure in the heady, mid-90s, Pomo heyday.

She now looks like an angry, very angry, nightmarish vision of androgyny, which leads us to this description of the handsome fellow: 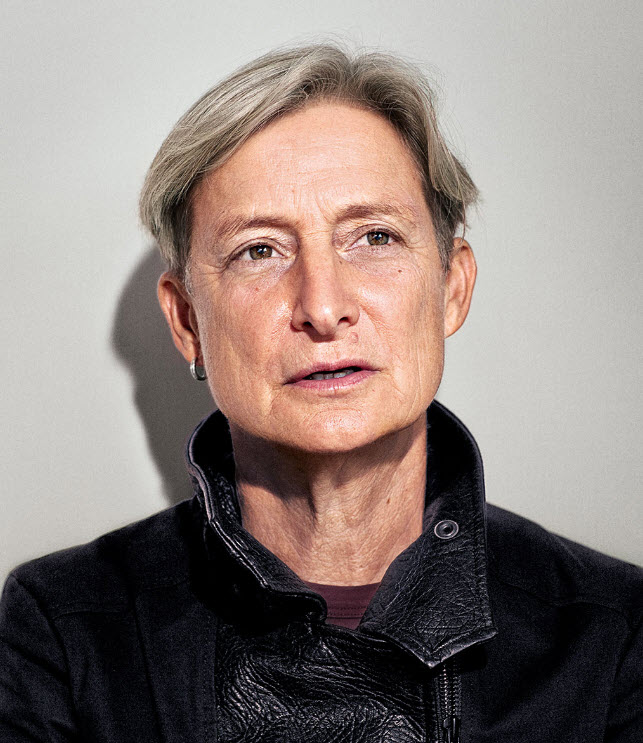 At 60, Butler has the lean, undeniable elegance of a cross-dressing Shakespearean heroine — a version of androgyny that has less to do with masculinity or femininity than with pants’ being expedient attire. Once, to her amused interest, a German newspaper described her as looking like “a young Italian man.” She wears a lot of black and gray. Her hair is short, side-parted, and falls forward a bit as she talks, requiring her to push it back with both hands.

Not surprisingly, Butler is a Jewish lesbian, a niche demographic that is probably, today, at the top of the pyramid in terms of cultural power and influence.

One could write a dissertation dissecting, and reading between the lines of, this paragraph:

Butler grew up in Cleveland, where her father was a dentist and her mother’s family owned movie theaters. When she was 12 or 13, a friend of her mother’s interviewed her as part of a teacher-training program. Asked for her dream job, the preteen Judith said she hoped to be a philosopher or a clown. This answer sounds either impossibly innocent or impossibly precocious; given that she was a middle-schooler who pestered her rabbi with questions about Martin Buber, probably the latter. Butler was an intense, focused reader. She was also gay, and so applying to colleges brought its own set of considerations. Butler went to Bennington because “it seemed to be a place where, as a young queer kid, I would be okay in 1974,” she says. “I knew that there were other people there who were at least minimally bisexual.” (Her parents, while not always wholly comfortable with her sexuality, were ultimately accepting. She remembers that her father was very happy when she came home from college with a Jewish girlfriend.)

The piece’s final sentence is a real beaut:

A project she’s been talking about lately with the psychologist and writer Ken Corbett, a friend, is a new version of Gender Trouble — illustrated, for kids ages 8 to 12.