I’m beginning to feel a little bit like Matthew McConaughey’s character in Season 01 of True Detective, where he traces a Satanic ritualistic cult of child-murderers to levels of government and a prominent church.

Pedophilia and sexual perversion in Hollywood is well-established, and over the decades there have been plenty of instances of organized pedophilia rings, most recently in Norway, being busted. Some have involved the highest levels of institutions in various Western countries, such as Canada and the United Kingdom (e.g., the missing Westminster pedophile dossier; Jimmy Saville; Rotherdam; and others.)

Of the recent bust in Norway this past November:

HELSINKI –  Norwegian police are investigating a pedophile network suspected to involve at least 51 people, and which includes the abuse of infants and at least one case of a suspect acknowledging abusing his own children.

Police have arrested 20 men so far in western Norway, with three convictions, in Norway’s largest abuse case to date, Deputy Police Chief Gunnar Floystad said. The 31 other suspects are from other regions in Norway.

Floystad told reporters Sunday that many of the suspects are highly educated, and include lawyers and politicians…

Prosecutors said the perpetrators met on the dark web, using encryption and anonymity to hide their tracks.

Which brings us back to the States… and Pizzagate.

The NYT has a piece today on “Dissecting the #PizzaGate Conspiracy Theories”.

Comments are, of course, shut off.

To me, the most important component of the conspiracy theory that can be most easily refuted (or elevated) is whether pizza related words have (or have not) been previously established as code words for pedophiles. Resolving this empirical question, it seems to me, would make major headway as to whether or not the conspiracy theory has any merit.

For example, in the Dark Web’s pedo community, does ‘number-of-pizza-slices’ verbiage represent ‘age-of-pedo-victims’ terminology? (This guy posted this.) Is this, in fact, an accurate conclusion? Who knows.

Like the FBI’s coded symbols memo, is there anything comparable in the use of pizza metaphors (or wider Italian-food metaphors) in general?  Alternatively, is there any other preexisting source (sociological or web-o-spheric) that delves into these pizza metaphors? This is what I would most like to see determined.

For instance, in 2012, Wikileaks obtained this strange ‘How thin to slice the pizza’ email circulated within Stratfor, a company that provides confidential intelligence services to large corporations:

Does the pizza offer include those of us who can’t make the meeting because we’re out here editing? ‘Cos if so, count me in.

This e-mail is color-coded in black and white and will combust in 30
seconds.

Chris Douglas wrote:
> Headcount!
>
> Who all is in the Austin office today who is going to want pizza? We
> only have one slice and we need to know how thinly to slice it…
>
> Simply send a single response, filed, color-coded, double-sided and
> appropriately labeled, signed in triplicate and set on fire.

The term “cheese pizza” had previously been used on 4chan as code for “child pornography.” An anonymous user speculated that other food-related terms could also have double meanings.

Regarding the latter, the NYT piece notes:

A participant on 4chan connected the phrase “cheese pizza” to pedophiles, who on chat boards use the initials “c.p.” to denote child pornography.

On this count, it seems something of a draw.

Perhaps the most important revelation the NYT piece brings to light is a 2007 WaPo obituary story on Mary Podesta, which it would seem puts many of the Podesta-related, Wikipedia emails to rest:

Mrs. Podesta, known as “Mama Podesta” to a who’s who of politicians, lobbyists and office holders, furnished and became a staple at Democratic dinners shortly after she moved to Washington in 1987. Her sons, who had been cooking for the fundraisers they staged, decided to improve their fare and asked if she would cook. Her modest but delicious offering was a hit.

“I know a lot of times I’ll be at a function someplace and they go, ‘Oh, you’re the Pesto Queen,’ ” she told the Associated Press in 2004. “Oh, God. I never looked for that title!”

Mrs. Podesta’s home cooking raised millions of dollars for candidates, but she contributed to the Democrats years earlier by raising two prominent sons — Tony, founder of the lobbying and public relations firm PodestaMattoon, and John, chief of staff for then-President Bill Clinton and now the founder and chief executive of the Center for American Progress.

Mrs. Podesta’s famous pesto, which was exotic to Washington palates 20 years ago, came from her husband’s family, which originated in the Liguria region of northwestern Italy.

This being said, however, I find it strange that the NYT piece didn’t attempt to explain the following major components of the Pizzagate conspiracy theory:

PODESTA’S HANDKERCHIEF: The NYT makes brief mention of the original, cryptic Podesta-related email which Wikileaks obtained. In that email, a friend of Podesta’s sends him rather strange language:

The realtor found a handkerchief (I think it has a map that seems pizza-related. Is it yours?”

Further down in the email exchange we learn that it is a “square cloth handkerchief (white w/ black)”. However, the NYT does nothing to provide an alternative context for why a handkerchief, a garment with a history of color-coded meanings amongst gay men, would have a ‘map’ on it that is ‘pizza-related’.

OBAMA PLAYING PING PONG WITH BOY PAINTING: James Alefantis is the uber-creepy owner of Comet Ping Pong. GQ named him the 49th most powerful person in Washington D.C. Impressive for a guy who runs a pizza joint, holds the occasional low-level fundraiser for Dems, and was the former lover of the equally creepy Media Matters founder David Brock.

Alefantis posted on his Instagram account what appeared to be a picture of Obama playing ping pong with a young boy. The NYT simply refutes the erroneous notion that this is a picture… but rather a realistic painting that is (oddly enough) hanging in the WH. What they don’t ask is why Alefantis found this painting post-worthy. Is it just because Obama is playing ping-pong, or might it be a form of an in-joke, namely, Obama playing ‘ping pong’ with a young boy. This is not to say that Obama ever visited Comet Ping Pong, but simply that Alefantis found the associated imagery both funny and unintentionally apropos. 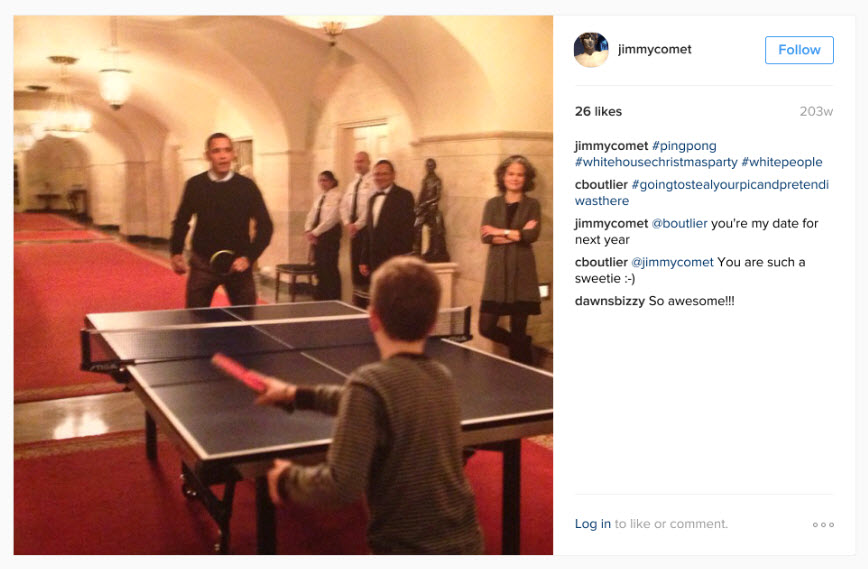 FREEZER PHOTO: Of the infamous ‘freezer photo’ that Alefantis posted to his Instagram account, which the NYT shows, the NYT writes:

The photo shows a walk-in refrigerator supposedly in the restaurant, described as part of a network of underground facilities. However, a reporter can confirm that there is no basement in Comet Ping Pong.

Comet’s spokesperson said the photo was taken during a visit to a restaurant Mr. Alefantis was considering leasing. Comet uses a low-slung refrigerator at Buck’s Fishing & Camping, Mr. Alefantis’s other restaurant two doors down on the same block, to store produce, cheese and proofing dough.

However, the NYT says absolutely nothing about the very strange usernames (e.g., “Werkinonmahnightcheese”),  hashtags (#murder, #killroom), and comments (“Just rinse it off when you’re done”; “Oh yeah this looks fun”) that accompany Alefantis’ Instagram post, all of which are shown in the NYT’s own published copy of the Instagram post. Very strange. 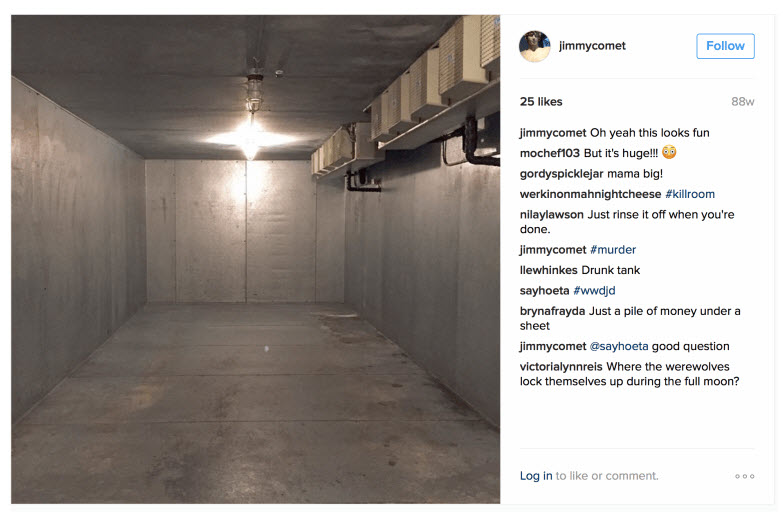 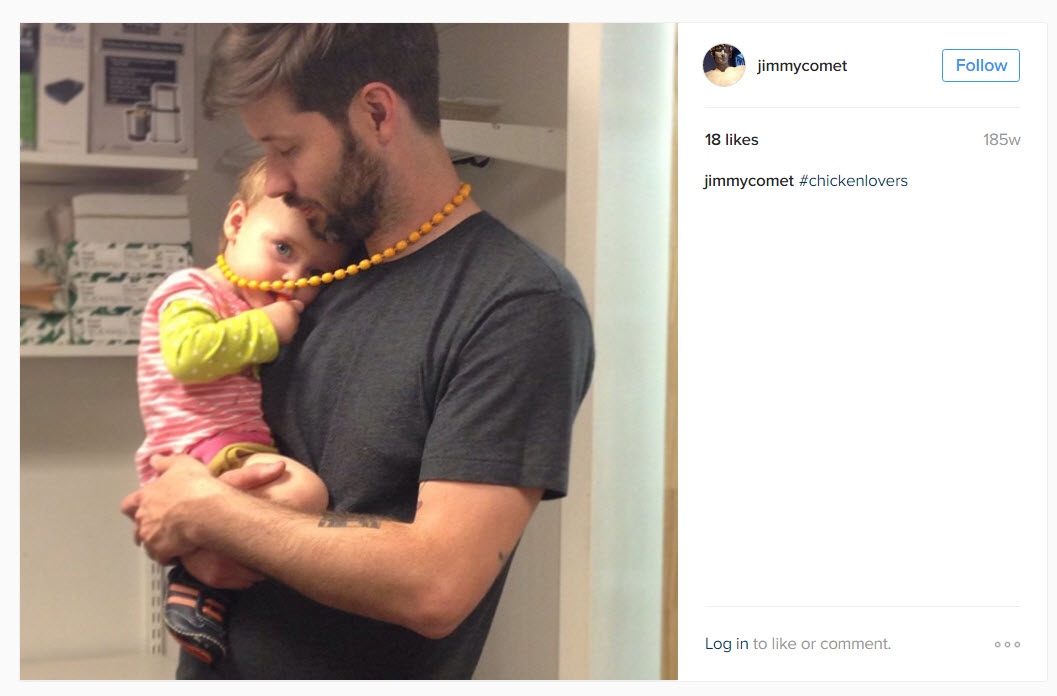 The archived images from Alefantis’ Instagram account, which he has since made private, may be a series of extreme coincidences… or inadvertent documentation of bragging in plain sight. There are just too many of these to go into here, such as this photo: 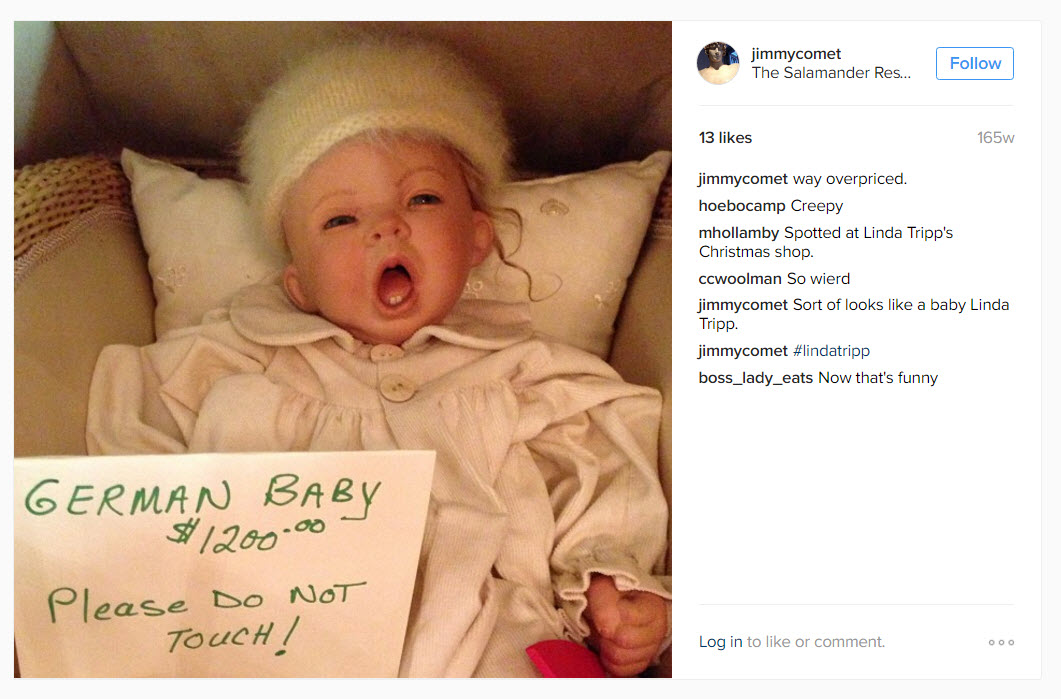 … or this photo from Alefantis’ Twitter feed, featuring a baby putting stacks of what appears to be foreign currency in her mouth: 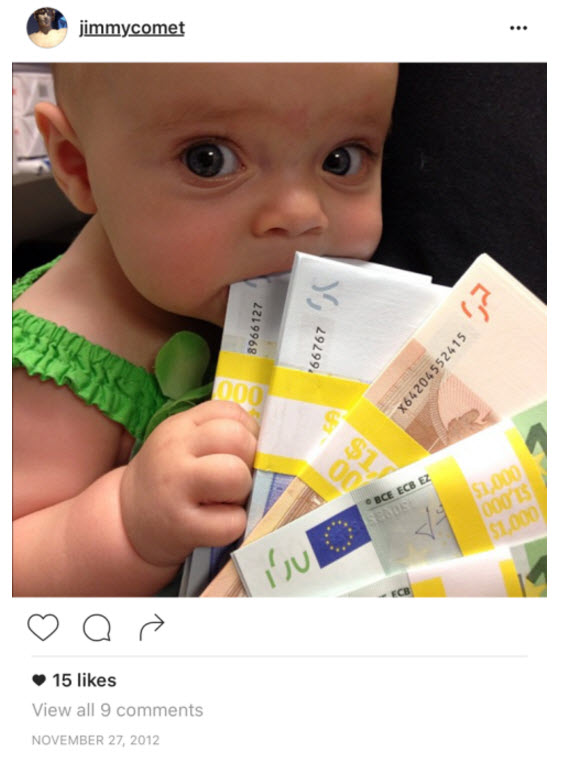 You can find many other sites that go into this in much more detail, detailing (among other things) other creepy photos posted by Alefantis or his Comet Ping Pong employees.

It’s worth noting that Alefantis’ Instagram profile picture is a statue of Antinous, the Greek youth and lover of the Roman emperor Hadrian.

TONY PODESTA: The strange aesthetic pleasures of John Podesta’s brother, Tony. From rather strange emails like this (Tony Podesta to John Podesta: “Mary not free. Would love to get a pizza for an hour?”), to his penchant for debased, degenerate, and ‘trangressive’ art. From a 2004 profile of Tony Podesta and his wife in The Guardian:

They are known for purchasing “awkward” works, such as video installations, that many other private collectors will not consider. “It’s easy to store them, but difficult to display them,” says Podesta. To get round the problem, he and his wife have excavated a huge subterranean vault beneath their house outside Washington – a white space 5m square and 4m high in which it will be possible to show “very complicated video pieces” on all four walls.

RUBY, EMERSON, AND MAEVE LUZZATTO:  The NYT makes zero reference to one of the biggest components of the conspiracy theory, the Wikileaks Podesta-related email that contains the following:

With enormous gratitude to Advance Man Extraordinaire Haber, I am popping up again to share our excitement about the Reprise of Our Gang’s visit to the farm in Lovettsville. And I thought I’d share a couple more notes: We plan to heat the pool, so a swim is a possibility. Bonnie will be Uber Service to transport Ruby, Emerson, and Maeve Luzzatto (11, 9, and almost 7) so you’ll have some further entertainment, and they will be in that pool for sure.

As I noted in a previous post, what other possible context could there be for this reference to three underage children? I am really trying to think of one. I desperately want to think of one. But I can’t.

The above email text appears to be written by Tamera Luzzatto, mother of the three children. But a parent who sells access to her children (whether physically or voyeuristically) wouldn’t be a first, nor is it difficult to imagine a liberal (this whole circle of people are as liberal as they come) otherwise feeling justified, towards the palliative cure her children provide to those suffering from the ‘disorder’ of pedophilia.

Furthermore, the header for the now-private Evie’s Crib blog (not very legible in the photo below) reads:

“Evelyn is growing up. Soon she will be the queen of the entire US of A. right now, for a limited time only, you can spend some time with her online, raw and uncut. Take advantage of this now, as in the future she will have the power of life and death over you.” 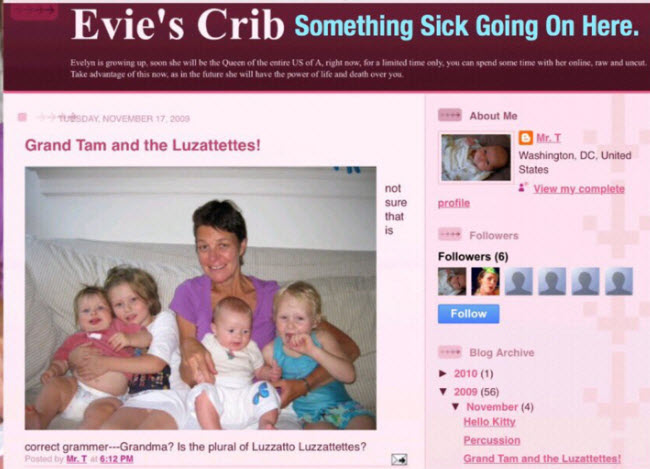 The woman in the photo above is Tamera Luzzatto (aka “Grand Tam”, “Farmer L”), who served as Chief of Staff to Hillary Clinton and now works at Pew Charitable Trusts. (The “Something Sick Going On Here” verbiage appears to have been added by whomever did the screenshot of the blog, before the blog went private.)

MANY OTHER ASPECTS: The NYT does not mention the ‘torture chamber’ email (perhaps just a turn of phrase); the possibility that the ‘Andrew Kline’ who is Besta Pizza’s owner (the venue that uses the “little boy lover” logo), was also an attorney in the Human Trafficking Prosecution Unit of the Department of Justice; the very strange case of Laura Silsby; nor the fact that, given its location on Connecticut Ave, Comet Pizza may be directly above an abandoned underground subway line, which (in conjunction with the close proximity of the places-in-question), would make these pictures from Alefantis quite relevant). 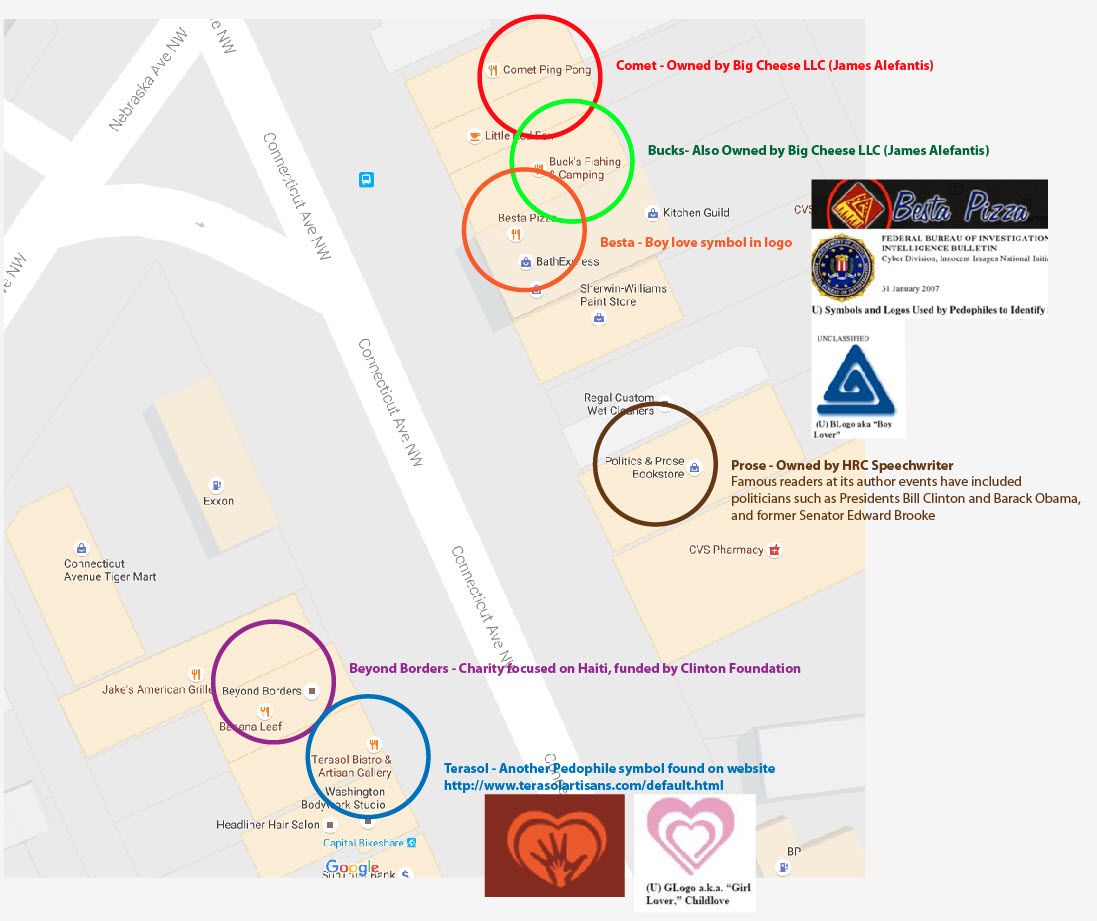 I invite you to search for words and phrases yourself from Wikileaks’ ‘Podesta Emails’ page.

If you want a video overview of just a few aspects, here is one a brief, 3-minute one:

Here is another person’s overview of things, complete with both wheat and chaff: