SPLC: “McInnes, Molyneux, and 4chan: Investigating pathways to the alt-right”

The $PLC has a new report titled “McInnes, Molyneux, and 4chan: Investigating pathways to the alt-right” written by “the Hatewatch Staff”. They are increasingly worried about how Alt-Lite and other identitarian-oriented individuals and sites are gateway drugs to dastardly Alt Right ideas.

Basically, they attempt to number-crunch some self-reporting done on some TRS threads and deduce who the Gateway Drugs are into red-pilling:

The alt-right is a motley movement, drawing in people from a number of venues and subcultures. The 107 individuals and platforms mentioned by posters in the TRS threads have been labeled according to their ideology, which include alt-right, legacy white nationalist, alt-lite, mainstream, libertarian, skeptic, men’s rights activist, and conspiracy, in addition to a random category for those not easily classified. This heterogeneity is a boon to the movement, creating a number of avenues for individuals of different taste and predilections to fall within its clutches.

“To fall within its clutches…”

“It was a dark and stormy night…” 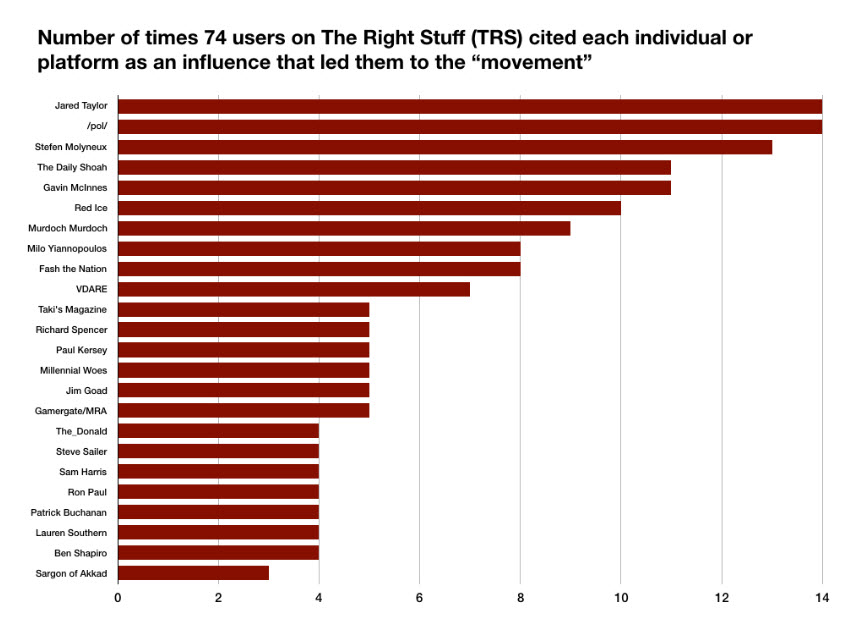 From the chart above, and from the following passage below, we have a pretty solid explanation for why The Cathedral first went after the gentlemanly Jared Taylor. It was he, after all, who was first major AR figure booted from YT and Twitter:

Disconnected as they might seem, the most cited influences — the “politically incorrect” 4chan board /pol/ and the American Renaissance editor Jared Taylor — hint at two common paths to the alt-right: either through participation in the rampantly racist and misogynistic online trolling culture of 4chan and its offshoots, or through exposure to Taylor’s variety of pseudo-academic “race realism” that couches timeworn racist tropes in the language of science.

The Silicon Valley giants can’t boot people from 4chan because they don’t own the platform. But they can boot Jared and AmRen from the big social media platforms.

A very positive sign (and humorous) is that Stefan is #3!

The prolific Molyneux has attracted more than 770,000 subscribers to his YouTube channel, adding up to more than 230 million views of his videos. He relies largely on charisma, delivering ill-researched and scientifically unsound lectures with a degree of confidence that eases viewers into accepting his arguments.

Molyneux, one TRS poster explained, “remains a great stepping stone between the alt-light and the alt-right.” 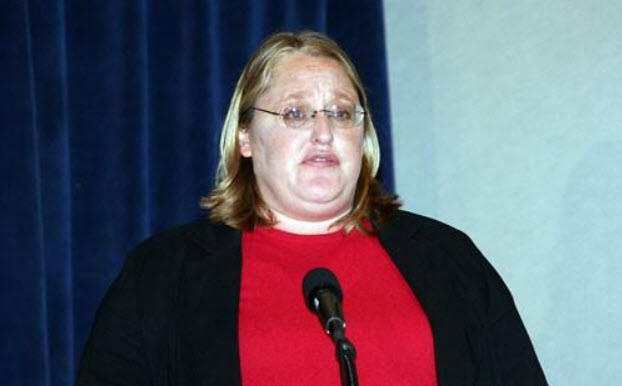 In summary, we see the SPLC’s ever-widening cabal of villains spreading like a cancer, as quickly and tenaciously as Heidi Beirich’s paranoia and sense of victimization.

“Libertarianism is a common path to the alt-right,” the report notes. Ditto for anarcho-capitalism. Civic nationalism is thrown under the bus too, characterized as “a poorly defined catch-all term for those who embrace nativism but shy away from more radical racist rhetoric.”

Even Sam Harris and Charles Murray are implicated.

Oi vey! Something must be done! Shut it down!

This entry was posted in Alt-Right, Jewish, Left. Bookmark the permalink.