A Look Inside the Anti-Police Protest Movement

In a must-read piece, James Piereson gives us “A Look Inside the Anti-Police Protest Movement“. Remember that story a few weeks ago where:

On the evening of December 13, several hundred supporters of the movement marched across the Brooklyn Bridge toward Manhattan for the purpose of staging protests at City Hall and other locations in the City. During that march across the walkway of the Bridge, one protestor picked up a garbage can and tried to throw it out on to the adjacent roadway and into the path of automobile traffic. Two police officers intervened to stop the man and to place him under arrest. At this moment, at least six other protestors came to the aid of their comrade, knocking the officers to the ground and then kicking and slugging them into submission. One officer suffered a broken nose in the melee. The assailants escaped into the night, but not before several witnesses used smart phones to film the attack.

While at least two are still at large, the biographies of those apprehended is quite telling:

Cindy Gorn, 29, charged with assault, rioting, and resisting arrest, is a graduate student at Columbia University and a professor teaching courses in geography at Sarah Lawrence College in Bronxville, NY. According to the College’s website, Ms. Gorn studies geography from the perspective of Marxist philosophy, and is also interested in “social movements, autonomous labor movements, health, and the environment.” She is also a “healing arts practitioner.” She teaches one course titled, “Mapping the World: Critical Cartography and GIS (Geographic Information Systems) for Social and Environmental Justice,” in which she uses maps to demonstrate to students “the inherent contradictions of capitalist society.” She also teaches at Hunter College, Columbia University, and Barnard College.

Erik Linkser, 29, who began the incident by throwing the garbage can onto the roadway, was charged with assault, rioting, resisting arrest, criminal possession of a weapon, and possession of marijuana. Mr. Linkser is an English professor at Baruch College in New York City where he teaches courses in writing and composition. He also teaches writing courses at Queens College. He holds degrees in English from the University of Iowa, and studied for a time at Harvard University. He writes and publishes poetry, including one interesting number that goes like this: “F— the police/To rise as you/Disappear below current/Interpretations of observations/F— the police!”

Zachary Campbell, 32, charged with riot and resisting arrest, is a Spanish instructor, graduate student, and “Transliteratures Fellow” at Rutgers University.

Marcia Garcia, 36, Campbell’s estranged wife, was similarly charged with riot and resisting arrest. She is a program coordinator at the Queens Museum of Art and up until last year worked as a curator at the Museum of Modern Art in Manhattan.

Robert Murray, 43, is charged with various counts of riot, assault, and resisting arrest that could easily land him in jail for a lengthy term. According to press reports, he tackled and slugged a police officer during the melee, breaking the officer’s nose. Murray is an organizer for the Services Employees International Union (SEIU) New York City, where (according to press reports) he is paid $105,000 per year. Murray was also a protester with Occupy Wall Street, and has been arrested during protests in the past, including once while demonstrating against the Republican National Convention in 2004.

Most telling, it should be noted, is that these 5 individuals are all white and highly educated.

That, more than anything else, speaks volumes about liberalism and its seminal role in the Suicide of the West. 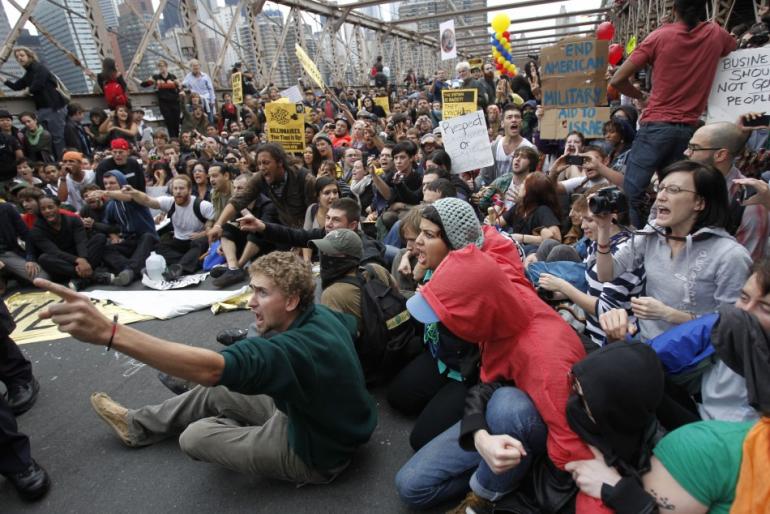 This entry was posted in Academia, Death of the West, Left. Bookmark the permalink.