ABC: The Roots of Trumpismo

In “The Roots of Trumpismo” (clever, real clever guys), the ABC News folks are finally trying to get a concrete understanding of the Sociology of Trump:

The answer, according to statistical analysis of an array of possible explanations tested in the latest ABC News/Washington Post poll, reflects two related but ultimately distinct sets of attitudes: Anti-establishment populism and pushback against outside groups. One is rooted in economic discontent; the other, in a desire among some Americans for traditional authority.

None of these alone explains Trump’s support in the GOP race, nor – especially – do core demographics such as political ideology, gender, age, education or religious belief. While he does better with less-educated adults, and lately, worse among women, evangelical white Protestants and strong conservatives, their explanatory power in Trump’s support is relatively muted, particularly in comparison with the group-based contours of the Democratic race.

“Group-based contours of the Democratic Party” is polite, poll-speak for the increasingly rigid coalition of group-identity politics consuming the modern Democratic Party. The flip side of this coin, which the pollsters don’t seem to want to address, is how the Democrats’ “group-based contours” provide no chair at the table for white identity politics, a void that Trump fills, albeit in an implicitly white way, given how the Establishment Culture forces use of code-words, lest one get called ‘racist’.

The ABC study provides “Four Theories of Trumpismo”, which boil down to:

Of this 4th theory:

The fourth possible explanation also proves quite powerful: pushback against other groups, including Muslims, undocumented immigrants and minorities seen as benefiting unfairly from affirmative action – a set of closely related views reflecting what academics describe as ethnocentrism. 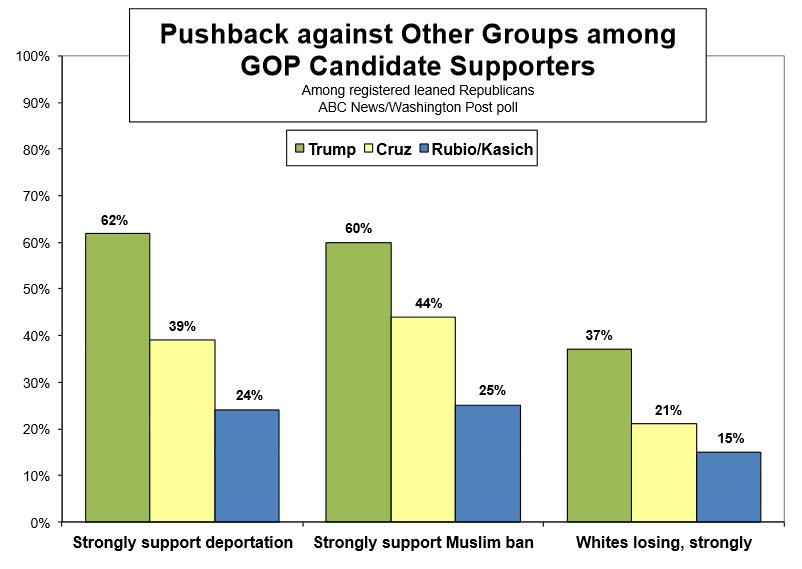 From the methodology link, ABC concludes:

These results identify a substantial group of Americans who, seven years into the political order of the Obama era, feel dislocated economically and socially alike. Struggling in the post-recession economy and drawn to traditional authority, they’re attracted to a populist outsider who offers strong anti-establishment credentials, protection against competing groups and a potent stance against the current social and political climate.

This entry was posted in Culture Wars, Republican Party. Bookmark the permalink.