Saying “All Lives Matter” is Racist

This surreal event at the Nutroots Nation gathering is a perfect distillation of where the Democratic Party (and our culture as a whole) is right now. The inmates are running the asylum:

Both Democratic presidential candidates were supposed to sit down with [gay illegal immigrant – Ed.] activist and journalist Jose Antonio Vargas to talk about immigration. Instead, they got shouted down.

O’Malley, the former Maryland governor, was up first, and his forum was hijacked by protesters who said they were from the “Black Lives Matter” movement. They moved toward the stage, chanting, “What side are you on? Black people! What side are you on?”

Two of the activists climbed onto the stage and seized the microphones as O’Malley and Vargas stood by patiently.

“It’s not like we like shutting shit down but we have to,” activist Patrisse Cullors said. “We are tired of being interrupted.”… 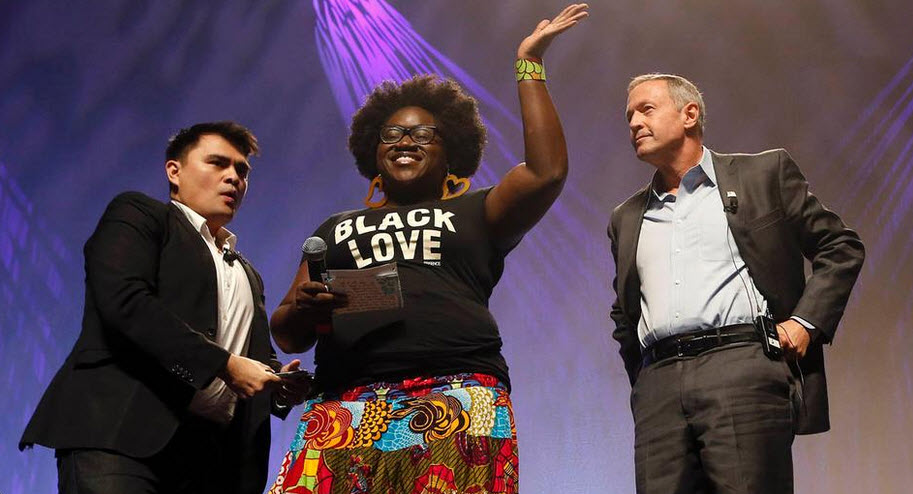 The Gay Illegal, The Queen of Black Love, and the Liberal White Guy.

Right on cue, O’Malley (an old, heterosexual, white guy who is part of the partriarchically and racially oppressive ruling class) immediately goes into Capitulation Mode:

Did that work to calm the feverish crowd down?

That was roughly as specific as the protesters allowed O’Malley to get. He went on to say, awkwardly, “black lives matter, white lives matter, all lives matter,” sparking loud boos.

O’Malley repeated the phrase and the audience kept booing. Vargas tried to quiet the crowd down, but time was up anyway.

Today, O’Malley’s concept of ‘damage control’ on the matter was to apologize — to actually apologize — for saying “all lives matter”. I’m sure he wasn’t keen on apologizing for “white lives matter”, as this would highlight a salient facet of this kerfuffle he’s just as soon forget about. From the Washington Times:

Former Maryland Gov. Martin O’Malley apologized after he was interrupted by protesters when the 2016 Democratic presidential candidate said “all lives matter” at the Netroots Nation conference in Phoenix over the weekend.

“That was a mistake on my part, and I meant no disrespect,” Mr. O’Malley said in an interview on “This Week in Blackness,” a digital show. “I did not mean to be insensitive in any way or to communicate that I did not understand the tremendous passion, commitment and feeling and depth of feeling that all of us should be attaching to this issue.”

This entry was posted in Culture Wars, Democrat Party. Bookmark the permalink.