The list of things that are synonymous with ‘white supremacy’ keeps growing. From FNC: 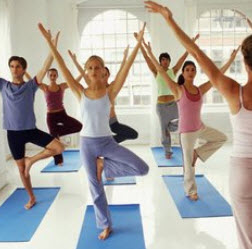 Shreena Gandhi, a religious studies professor at Michigan State, claims in an article she recently co-authored that Americans who practice yoga are contributing to white supremacy and promote the “yoga industrial complex.”

White Americans should learn yoga’s history, acknowledge the cultural appropriation they engage in and possibly reduce the cost of yoga classes for poor people, a group that often includes people of color and “recent immigrants, such as Indian women to whom this practice rightfully belongs,” Gandhi argued…

She co-authored the piece titled “Yoga and the Roots of Cultural Appropriation,” with Lillie Wolff, a self-described “anti-racist white Jewish organizer, facilitator, and healer,” who has called for “decolonizing” yoga, the College Fix reported.

I cracked up at the co-authors’ bios at the bottom of their column:

Shreena Gandhi teaches in the Religious Studies Department at Michigan State University. She received her BA from Swarthmore College, her MTS from Harvard Divinity and her PhD from the University of Florida where she focused on Religion in the Americas. She is working on revising her manuscript to focus on liberal white supremacy culture and yoga in the US, and is working on a long term project with other scholars of color, tentatively titled, Decolonizing US Religious History.

Lillie Wolff is an antiracist white Jewish organizer, facilitator, and healer. She is an Organizer/Trainer with Crossroads Antiracism and has been a student and practitioner of yoga since 2003. Lillie is passionate about decolonizing and politicizing yoga and the healing arts, and building a sustainable movement for collective liberation that is grounded in accountable spiritual practice and healing justice. She was a Joint Regional Fellow with the Arcus Center for Social Justice Leadership in 2017. Lillie earned a BA in Human Development and Social Relations from Kalamazoo College.

This entry was posted in Academia, Anti-White, Political Correctness. Bookmark the permalink.