“Eurosceptic ‘Earthquake’ Rocks EU Elections” is how the BBC puts it:

Eurosceptic and far-right parties have seized ground in elections to the European parliament, in what France’s PM called a “political earthquake”.

While the French National Front and UK Independence Party both appear headed for first place, the three big centrist blocs in parliament all lost seats.

The outcome means a greater say for those who want to cut back the EU’s powers, or abolish it completely…

“They no longer want to be led by those outside our borders, by EU commissioners and technocrats who are unelected. They want to be protected from globalisation and take back the reins of their destiny.”

Martin Schulz, the former Socialist president of the European Parliament – said of the FN victory: “It’s a bad day for the European Union, when a party with a racist, xenophobic and anti-Semitic programme gets 25% of the vote.”

From the BBC’s exit polling:

In Denmark, with 95 percent of votes counted, the main government party, the Social Democrats, retained their five seats to remain the biggest party.

But the big winner in the elections was the populist, opposition Danish People’s Party, which won three more seats for a total of four.

From the Globe & Mail:

The Front National’s surging popularity came as a surprise to France’s mainstream parties and to those elsewhere in the EU, where resentment against the EU’s expanding powers is growing. French Prime Minister Manuel Valls called the Front National’s victory “a shock, an earthquake that all Europe’s leadership must respond to.”

Front National Leader Marine Le Pen, who is the daughter of the xenophobic party founder Jean-Marie Le Pen, said her victory had opened a new front against the EU, which, she argued, has robbed member countries of their sovereignty. “What has happened tonight is a massive rejection of the EU,” she said as the exit polls rolled in.

In Britain, UKIP was on course to win, displacing Prime Minister David Cameron’s Conservatives and burying their coalition party, the Liberal Democrats.

In Austria, the far-right Freedom Party could not beat the ruling conservatives, but took an impressive 20 per cent of the vote, according to projections…

The shock in Greece was the rise of the neo-Nazi Golden Dawn party, which received up to 10 per cent of the vote, placing it third overall in Greece and giving it seats in the EU parliament for the first time. The party denies it is influenced by Nazi ideology, but is vehemently anti-immigrant and has been associated with violent acts.

There’s some analysis of the key issues facing EU voters here, which includes this interesting graphic of EU scepticism: 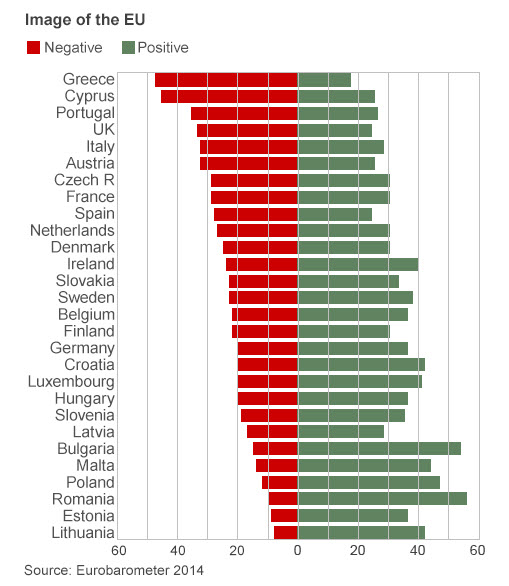 The far-right Jobbik also had cause to celebrate.

“I have important news for you: today Jobbik is the second largest party in Hungary,” Gabor Vona, the Jobbik leader told cheering supporters. “The low turnout shows that Hungarians do not believe in the current European Union.

“We all want a common Europe, but a different one to what we have at the moment,” he added.

Across the city, a hoarse Prime Minister Viktor Orban told supporters: “We won and we won hugely.” Fidesz scored the best result of all members of the centre-right European Peoples Party, and therefore contributed most, relatively speaking, to the EPP victory, he said.

The biggest losers of the election – and the main surprise in Hungary – was the rout of the Socialists. With just below 11%, they barely beat the Democratic Coalition, a splinter group set up by former Socialist Prime Minister Ferenc Gyurcsany, with close to 10%. Each party will have two MEPs.

The leadership of the Socialist Party offered its resignation – to be decided by the party next Saturday. Hungary’s Green party, the LMP, just scraped over the 5% threshold and will have one MEP. Only 2.2 million of Hungary’s eight million electorate cast their votes.

So, what does this portend for the EU’s future? From a CNN article:

Exit polls indicate that left-center and right-center parties will still hold a majority of seats in the European Parliament, which plays a key role in shaping European laws and will weigh in on who the European Commission’s next President should be.

But right-wing parties are gaining ground, said Simon Usherwood, an expert on European politics at the University of Surrey.

“I think what’s really changed is you’re seeing a lot more groups on the edges, particularly with the far right, who are going to be much more of a feature of the next five years of the parliament,” he said.

So what does that mean?

“They don’t have enough votes to stop legislation going through,” Usherwood told CNN, “but what they will get, particularly on the far right, is the time for speaking in debates, the chairmanship of certain committees, which means that they’re going to have much more of a platform on which they can sell their message to voters.”

Something is happening here, but you don’t know what it is, do you Mr. Jones?

This entry was posted in Europe, Third Party, UK. Bookmark the permalink.