2015 was the Year the Left Began Eating Its Own. From BLM screamers and ‘save spaces’ on college campuses, to the Great Oscar Whiteness Crisis, to the idea that S.F.’s police dept is full of racists, it was an exciting year.

As 2016 gets underway, this wonderful sideshow trend appears to only be gaining better traction… within leftist environments.

Today’s exhibit: Gloria Steinhem and Co argue that young girls only favor Boiny over Shrillary because, in supporting the former, they get to meet boys.

A true feminist, you see, will always support the woman over the man. 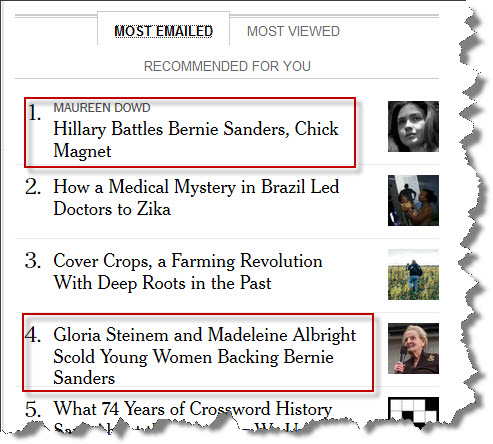 This entry was posted in Democrat Party, Political Correctness. Bookmark the permalink.