Well, the spin stops here. Ted O’Baxter is officially out at FNC:

Bill O’Reilly has been forced out of his position as a prime-time host on Fox News, the company said on Wednesday, after the disclosure of settlements involving sexual harassment allegations against him. His abrupt and embarrassing ouster ends his two-decade reign as one of the most popular and influential commentators in television.

“After a thorough and careful review of the allegations, the company and Bill O’Reilly have agreed that Bill O’Reilly will not be returning to the Fox News Channel,” 21st Century Fox, the parent company of Fox News, said in a statement.

Personally, I’m glad to see him go. It’s long overdue, if only because his show jumped the shark years ago.

20 years ago, O’Baxter played a seminal role in challenging the shibboleths of Political Correctness. But then his ego swelled, he got lazy and uninformed, and started ‘phoning it in.’

He will be succeeded in the 8 p.m. Eastern slot by Tucker Carlson, who moved to the channel’s prime-time lineup only in January. “The Five,” an ensemble political round table, will shift to 9 p.m. from the afternoon.

Moving Tucker to 8pm is a decent move, in that Tucker is younger and more Alt-Right-friendly, a demo that will only grow in the future.

Moving The Five to 9pm means I won’t be watching FNC at 9pm. That show is… entertainment, not news or news analysis. I’m hoping FNC can grow a more serious show to place at the primetime 9pm slot, but they probably won’t, as The Five (as inane as it is typically is) gets good ratings.

Fox will be filling the 5 p.m. slot with a new show hosted by Eric Bolling, a longtime O’Reilly fill-in…

Fox’s announcement also noted that “The Story with Martha MacCallum” will debut on May 1 at 7 p.m. MacCallum had been in that time slot hosting “The First 100 Days,” a show centered on the beginning of President Trump’s administration. The network appears to be giving her a vote of confidence with a permanent show.

Hannity is staying put at 10pm.

Update (9pm EST): The logo on tonight’s show, hosted by Dana Perino, is missing something… and (graphics-wise) appears to have been hastily edited: 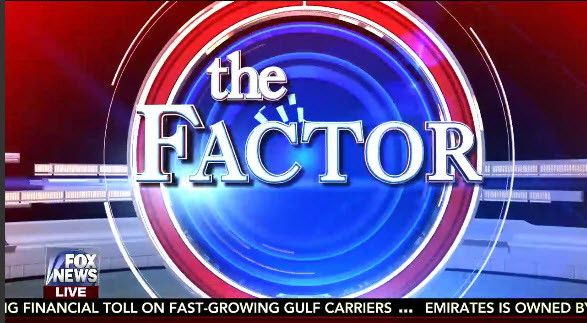