While the Left likes to ridicule the War Against Christmas, the European Left’s soup de jour of political correctness is a War Against Black Pete. 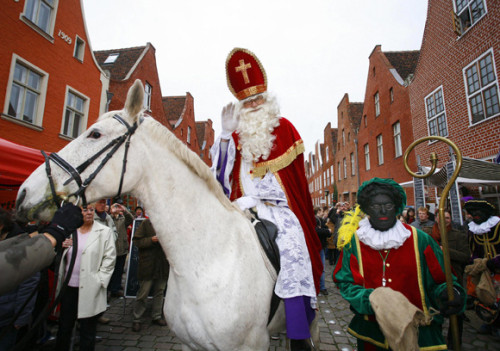 Who is Black Pete? And why must he be stopped?

And so on and so forth…

“Why the Dutch Love Black Pete” is an op-ed currently on the NYT.com’s top #10 list. Written by Arnon Grunberg, it provides a decent primer on Black Pete:

When I was growing up in Amsterdam in the 1970s, the phenomenon of Santa Claus was relatively unknown. Christmas was celebrated without Santa and mostly without gifts. St. Nicholas — Sinterklaas in Dutch — was the man with the presents.

If one had the good fortune to be Jewish, one received presents not only on Dec. 5, the eve of Sinterklaas’s name day, but also at Hanukkah. Only in recent years has Santa Claus, who comes on Dec. 25, made his rise to stardom in Holland, and today a Dutch child — or a Dutch adult for that matter — no longer has to be Jewish to cash in twice in December.

Sinterklaas arrives from Spain by steamboat in late November, travels farther on horseback, climbs onto roofs and on Dec. 5, known as “Pakjesavond,” drops presents through the chimney with the help of the Black Petes, a crew of dark-skinned helpers wearing large earrings who cavort and entertain and, as Dutch parents often tell their children, owe their blackness to chimney soot.

So, why is there suddenly a leftie echo chamber urging the banning of Black Pete? Because, as the recent Washington Redskins kerfuffle attests to, political correctness is as strong (if not stronger) than ever.

Until recently, Black Pete was uncontroversial. Not because the Dutch are particularly racist, but because Sinterklaas, like the royal family, is sacred in the Netherlands, perhaps because of a dearth of other, specifically Dutch traditions. A matter, in other words, of conservatism.

Such traditions are even more important today, given the view that, in order to safeguard the Dutch national identity, homegrown culture and folklore must not be tampered with — a view expressed primarily, though not exclusively, by the extreme right wing Party for Freedom, run by Geert Wilders.

But just as the defense of traditions has grown stronger, so has the criticism that Black Pete is a racist holdover from the Netherlands’s colonial past. In January the United Nations High Commission for Human Rights sent a letter to the Dutch government stating that Black Pete perpetuated the image of people of African descent as second-class citizens and constituted a “living trace of past slavery.”

The response of the Dutch (that is, the whites who are the people one thinks of when one imagines the ‘Dutch’)?

The Dutch government responded by saying that it regarded the Sinterklaas tradition as a children’s celebration, that it was aware of the differences of opinion concerning Black Pete, but that it was highly committed to combating discrimination in all forms…

In The Hague, the seat of government, a demonstration was organized for the preservation of Black Pete, while a pro-Black Pete Facebook page received two million likes almost immediately. Even the nation’s highest-circulation newspaper, De Telegraaf, agreed that the United Nations letter constituted interference in the Netherlands’s domestic affairs.

In a debate in Parliament, Mr. Wilders’s party asked the minister of education, culture and science whether she shared the view held by some that “Dutch traditions” should be made subordinate to “multicultural drivel.” Not to be outflanked, both Prime Minister Mark Rutte and the mayor of Amsterdam recently spoke up in defense of Black Pete, albeit with reservations. Sinterklaas, Mr. Rutte said, would not be Sinterklaas without Black Pete.

As The Guardian reported:

“Most Dutch remain stubbornly attached to the custom. An October opinion poll revealed that 91% of Dutch did not want to change the tradition to placate the country’s ethnic minorities.”

And the following quote shows, once again, how those ‘offended’ by such ‘racist’ depictions tend to not be minorities themselves… but liberal whites:

Even Edgar Pelkmans, a student from the former Dutch colony of Surinam [clue: he’s black – Ed], said the practice was harmless: “I’m not that offended: he’s like one of Santa’s elves.”

But back to Gurnberg. The best he can muster (he’s writing in the NYT, after all) is this smarmy conclusion:

Of course, there were Dutch people who saw things differently, and there were many with no opinion either way. Yet the general tenor among the Dutch public was that “they” should keep their mitts off “our tradition,” an opinion you can hear in any number of variations on any street corner. By “them” people mean the United Nations and “unnatural” Dutch citizens, by both birth and naturalization, who want to put an end to this admittedly dubious tradition.

The Black Pete debate underscores how deep within the Netherlands’s prosperous and safe society lies the fear of losing identity, undoubtedly fueled by globalization, migration and the notion that the European Union is gradually doing away with the European nation state…

Which once again goes to prove that national identity often boils down to distasteful folklore.

When the people rise up like this, in solidarity on a largely symbolic issue, there is hope.

This entry was posted in Europe, Political Correctness, White Identity. Bookmark the permalink.