There are some days I really like John Boehner. He seems like a good guy, genuine, of humble origins.

But then, when it comes to the single most important issue facing (white) America, this is the leadership we get from the one political party we are allowed currently to operate through: 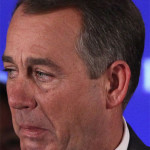 House Speaker John A. Boehner announced Tuesday that he has hired a longtime advocate of legalizing illegal immigrants to be an adviser, signaling that the Republican is still intent on trying to pass an immigration bill during this congressional session.

Immigrant rights advocates cheered the move as a sign of Mr. Boehner’s dedication to action. Those who want a crackdown on illegal immigration said the top Republican in the House has moved closer to embracing amnesty by hiring Rebecca Tallent, a former staffer for Sen. John McCain and fellow Arizona Republican Jim Kolbe.

“Tallent’s hiring suggests he really does still want to push an amnesty through the House, which to me suggests that the immigration hawks still have their work cut out for them,” said Mark Krikorian, executive director of the Center for Immigration Studies. “She is a professional amnesty advocate.”

Ms. Tallent is leaving a job as immigration policy director for the Bipartisan Policy Center and will join Mr. Boehner’s staff Wednesday, putting her in the center of one of the thorniest issues in Congress…

She has been involved in writing a number of broad legalization bills, including one for Mr. Kolbe and two for Mr. McCain in the past decade. She was also a senior policy adviser during Mr. McCain’s failed 2008 presidential campaign…

And this is why the GOP, immersed in their beltway bubble, will lose by a larger margin in 2016 than they did in 2012.