It seems that Chaplin, despite the endearing qualities he carefully crafted into his Little Tramp, Chaplin himself was a megalomaniac: 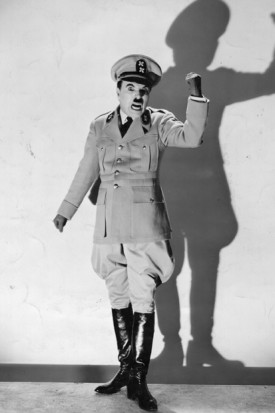 Chaplin’s hubris had no limits. Offered prizes and awards, he was ungracious: ‘I don’t think you are qualified to judge my work,’ he once said, returning a trophy. His knighthood was delayed until 1975 because he’d declined to appear on stage at a Royal Variety Performance, which was ‘construed as an insult to George V’.

The theme of Ackroyd’s book is the alarming contrast between the sweetness of the Little Tramp, the saviour of fallen women and lost children, and the monstrousness of Chaplin himself, who came across to every single person who ever met him as difficult, suspicious and angry. He was ‘dour and unsociable’, ‘nervous, withdrawn and morose’. He ‘smiled rarely and sourly’. Robert Florey, an assistant director, called him a ‘tyrannical, wounding, authoritative, mean, despotic man’. His children, as is always the way, came off worst…

Hannah, Chaplin’s mother, was a singer, a soubrette, a mender of old clothes — possibly a prostitute. She was certainly a lunatic. Records show she was incarcerated in various asylums, put in a padded cell and given shock treatments. The young Chaplin was despatched to the Southwark workhouse, then to a school for orphans and the destitute. His father was useless — he died of drink aged 38. Chaplin’s various stepmothers were neglectful and cruel, failing to feed him and locking him out in the rain. All alone, he found himself clog-dancing outside pubs. He had nothing, save demonic self-belief — which onlookers never failed to register. He survived, he said, by being suffused with ‘the exuberance that comes from utter confidence in yourself. Without it, you go down in defeat.’ Hence, his demonic arrogance; and also the origins of the indomitable Little Tramp, who picks himself up and trots jauntily off into the sunset.