We have a less exotic, but perhaps more disconcerting explanation: Our own study of over 1.25 million stories published online between April 1, 2015 and Election Day shows that a right-wing media network anchored around Breitbart developed as a distinct and insulated media system, using social media as a backbone to transmit a hyper-partisan perspective to the world. This pro-Trump media sphere appears to have not only successfully set the agenda for the conservative media sphere, but also strongly influenced the broader media agenda, in particular coverage of Hillary Clinton.

While concerns about political and media polarization online are longstanding, our study suggests that polarization was asymmetric. Pro-Clinton audiences were highly attentive to traditional media outlets, which continued to be the most prominent outlets across the public sphere, alongside more left-oriented online sites. But pro-Trump audiences paid the majority of their attention to polarized outlets that have developed recently, many of them only since the 2008 election season… 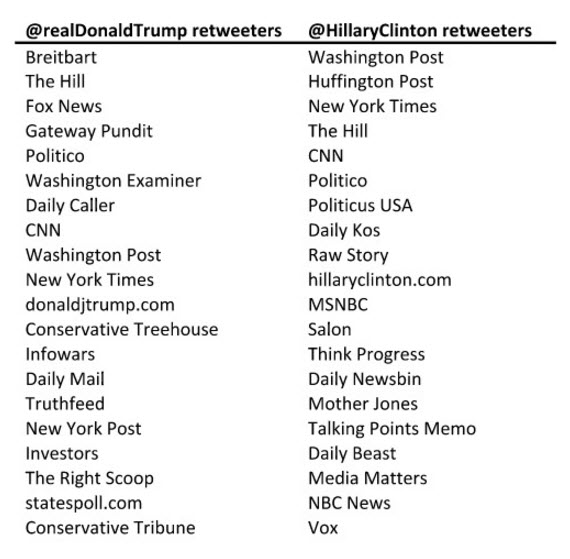 The most frequently shared media sources for Twitter users that retweeted either Trump or Clinton.