As Obama & Hillary seek to greatly increase the number of Muslim ‘refugees’ into the U.S., we have this from FNC:

Newly obtained congressional data shows hundreds of terror plots have been stopped in the U.S. since 9/11 – mostly involving foreign-born suspects, including dozens of refugees…

“[T]hese data make clear that the United States not only lacks the ability to properly screen individuals prior to their arrival, but also that our nation has an unprecedented assimilation problem,” Sens. Jeff Sessions, R-Ala., and Ted Cruz, R-Texas, told President Obama in a June 14 letter, obtained by FoxNews.com…

For the period September 2001 through 2014, data shows the U.S. successfully prosecuted 580 individuals for terrorism and terror-related cases. Further, since early 2014, at least 131 individuals were identified as being implicated in terror.

Across both those groups, the senators reported that at least 40 people initially admitted to the U.S. as refugees later were convicted or implicated in terror cases.

Among the 580 convicted, they said, at least 380 were foreign-born. The top countries of origin were Pakistan, Lebanon and Somalia, as well as the Palestinian territories.

Remember, if you raise any concerns about this… you are a hateful Islamophobe… and probably a conservative white. 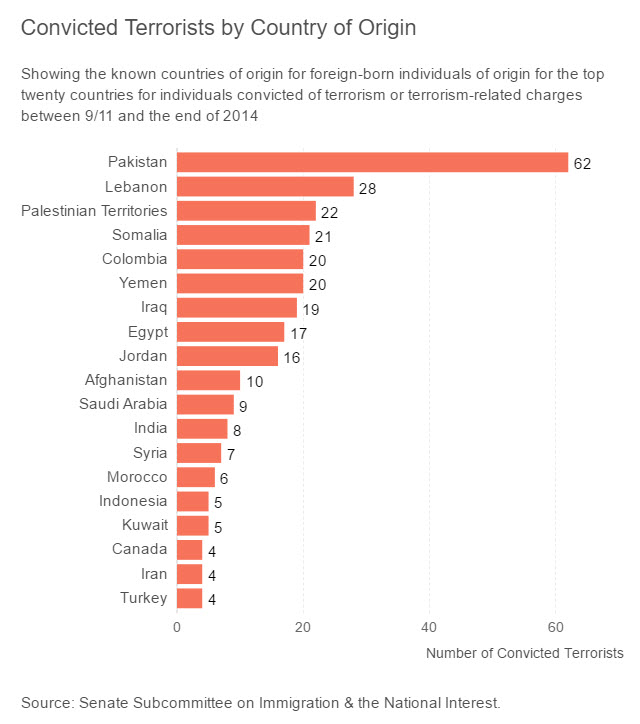 This entry was posted in Immigration, Islam, War on Terror. Bookmark the permalink.