To the aforementioned points about Conservative Inc’s Mandela Problem, Mediaite is on a virtual 24/7 cycle of pumping out posts on liberals’ highlighting of conservative opposition to Mandela in the ’80s, as well as on the gulf between Conservative, Inc opinions of Mandela and the grassroots’ opinions.

Here’s one on the The Reverend weighing in (“Al Sharpton: ‘Betrayal of History’ to ‘Sugarcoat’ U.S.’s Opposition to Mandela“):

On NBC’s Meet the Press Sunday morning, MSNBC host Al Sharpton warned against “sugarcoating” America’s ambivalent history with Nelson Mandela, and pushed back against another panelist who argued that Ronald Reagan was aggressive in his support of Mandela’s release.

“There was a real battle in this country,” Sharpton said. “So when Randall Robinson and Maxine Waters and Reverend Jackson led that fight, they were attacked for supporting communism.”

“Let’s remember, the ANC, they were pursuing freedom,” Sharpton continued. “Many of the communist nations embraced them, this country did not. It was not like they were born Marxist; they were born people seeking to be free. Some of the Marxist nations, either genuinely or in a self-interested way, tried to embrace that. This country did not and fought that and denounced them and denigrated them. And I think for us now to sugarcoat that is a betrayal of history. We chose sides. We chose the wrong side.”

“It wasn’t that the United States was taking the side of the South African government and apartheid,” Wall Street Journal columnist Paul Gigot said. “Everyone agreed that apartheid was odious. The disagreement was over how best to pursue the breakdown. After the sanctions debate, President Reagan picked an ambassador, Edward Perkins, to South Africa, who was a black American, who argued for the release of Mandela, and may in fact have had significant influence in releasing him.”

Sharpton wasn’t having this. “Let’s be clear, Reagan supported veto on bills, Reagan denounced Mandela, called him names. He evolved after a protest movement here turned the tone and public opinion. But let’s not act like Reagan was a major supporter of Mandela and the anti-apartheid movement. It’s just not true.”

And to that aforementioned awkward prostrating by Conservative, Inc, we have “Newt Gingrich Fires Back at Anti-Mandela Facebook Commenters“, wherein that heavyset believer in activist government was asked by CNN’s Candystore Crowley about the many negative comments Newt has received on his FB page, like this one: 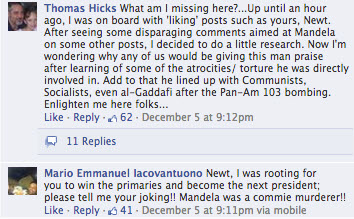 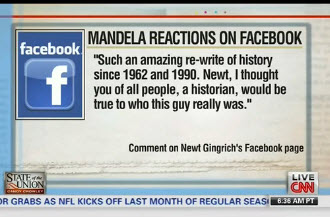 Newt, not surprisingly, was himself “surprised” by such reaction, and “amazed at the intensity” of it.

Gingrich responded on CNN’s State of the Union Sunday morning.

“What would you have done?” Gingrich asked, noting that Mandela opposed, both politically and personally, what was effectively “a police state.” “After 27 years in prison, he doesn’t come out bitter. He doesn’t come out angry. He comes out as an extraordinarily wise man who actually invites his prison guard to sit in the front row at his inauguration as president.”

“I think some people bought a rationale that defined everybody who was in any way in rebellion against the established system in the third world as anti-American,” Gingrich said. “There are people who have sustained this kind of mythology. There’s no question that in the ’50s Mandela moved from a nonviolent model toward being allied with the Communists. My point to conservatives is: there weren’t any conservative allies. Churchill allied with Stalin in World War II. I think in a similar tradition, Mandela was desperate by that stage, he saw the scale of the oppression, and the only allies that were available, frankly, were on the hard left.

I also love Candystore saying that Reagan, in his opposition to sanctions against South African within the context of the Cold War, presuming Reagan was “on the wrong side of history”.

This entry was posted in Africa, MSM, Republican Party. Bookmark the permalink.