CoS Cult Leader Spied on His Dad

The LA Times reports that David Miscavige, leader of the CoS cult, hired two full time, round the clock, private dicks to follow his own father, after the latter left the cult: 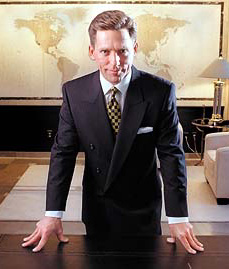 For 18 months private detectives tracked every move made by the father of David Miscavige, leader of the Church of Scientology, as they eavesdropped, spied on his emails and planted a GPS unit on his car, according to police records.

The church paid the two detectives $10,000 a week through an intermediary, the records indicate, all because Miscavige feared that his father would divulge too much about the organization’s activities.

The episode, detailed in documents obtained by the Los Angeles Times, is the latest in a decades-long series of allegations that the church has intimidated, harassed or abused current and former members, at times going to great lengths to dissuade them from discussing their experiences or knowledge of the secretive religion.

The surveillance of Ronald Miscavige Sr., a longtime Scientologist who had recently parted ways with the church, was described by Florida private eye Dwayne S. Powell, after he was arrested in July 2013 near Milwaukee with two rifles, four handguns, 2,000 rounds of ammunition and a homemade silencer in his rented SUV…

“They advised that Ronald’s son, David Miscavige, the leader of the Church of Scientology, is obviously having them watched because they left the church two years ago and David is afraid that Ronald will speak with the media about the negative inner workings of the church and David’s abuse of the members of the church,” a police report states.

In his July 2013 interview with police, Powell said he and a second investigator, his 21-year-old son Daniel, searched the elder Miscavige’s garbage, photographed him wherever he went and tracked him with a GPS device attached to his car and linked to an iPad that read out his location, the documents state. Police found marks on the underside of the car that they concluded were made by the magnetic GPS device, the records say.