While the media obsesses over a most rare instance (i.e., a white guy shooting at a car full of hip-hop thugs), routine stories like this are ignored:

Four [black] people have been charged with murder in the deaths of three [white] people who were found stabbed last week in a burning house on Detroit’s west side.

A vehicle and other items that belonged to the victims helped link the suspects to the crime, Detroit police said.

Firefighters were called the afternoon of Feb. 10 to a house fire on the 13000 block of Bentler, just south of I-96 near West Outer Drive. Inside, they found a dying man on the first floor and two dead men in the basement.

Lawrence Bowman, 51, was stabbed multiple times and died from a gunshot to the head, according to the Wayne County Medical Examiner’s Office.

“The nature of the wounds were horrific, all three victims were stabbed multiple times … In addition, the fire had been obviously set to cover up what turned out to be a brutal murder in an attempt to destroy potential evidence,” Woody said in a news release.

Imagine the horror of the victims’ last moments. This is who they saw torture them. These are the last faces they saw as their lives were snuffed out: 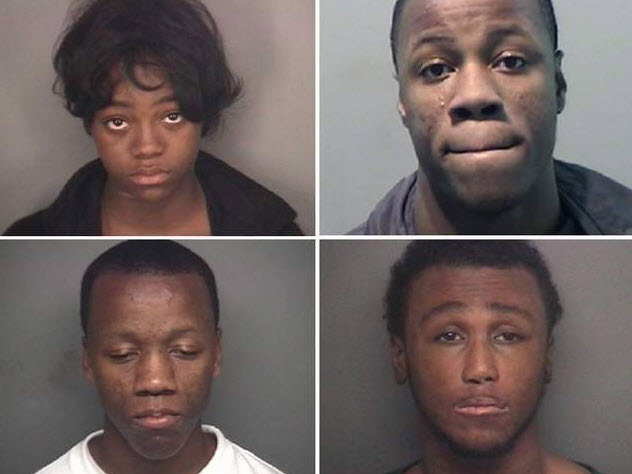 This entry was posted in Black, Crime, MSM. Bookmark the permalink.