The AP has a story called “Diversity Prompts Increased Racial Isolation”, which uses the CA town of Watsonville as the microcosm of California writ large and, eventually, America writ large: 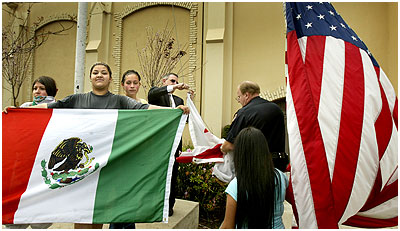 Spanish is spoken in most homes and businesses in town, and one out of five households is linguistically isolated, meaning no one over 14 speaks English.

Rising immigration hasn’t made Watsonville more diverse; it is a community heading toward racial isolation, a growing phenomenon in a state that offers one possible look at how the nation may change as non-Hispanic whites become a minority in the coming months.

Watsonville vibrancy is also the product of progressive social engineering, acting in concert with a massive influx of Mexicans into the town. A former Watsonville mayor beams approvingly:

“For me, downtown Watsonville is like being in a small Mexican town,” said Oscar Rios, who was Watsonville’s first Latino mayor. “Everyone speaks Spanish. The restaurants are Mexican. It’s got a very different feel than a traditional American town.”

Rios came into office after a landmark voting rights case 25 years ago deemed Watsonville’s at-large election system discriminatory and mandated district elections to end all-white political leadership. At the time, 50 percent of the residents were Hispanic.

Today, 82 percent are either immigrants, or descendants of immigrants, mostly from Mexico but also elsewhere in Latin America.

But predominantly white neighborhoods are also seeing an influx of Latinos, Logan said.

Here’s another wonderful byproduct of this vibrant diversity:

Watsonville, where 40 percent of the residents are foreign born, is in the early phase of the transformation. The community has a 23 percent unemployment rate, and poverty rates twice as high as the rest of California.

And, per our ongoing “In The Shadows” drinking game, you must take a shot!

Current Mayor Lowell Hurst, who is not Hispanic, said in his 30 years in Watsonville, the community has changed a lot.

“We have more people that probably lack legal status and that means more people that are really kind of living in the shadows,” he said. “Certainly there’s been white flight from this city as people’s economic status improves and they wish to have better opportunities.

He added: “But do people flee because of race or language? I don’t know.”

Why would anyone, especially whites, want to flee from this wonderful, Mexican diversity?

Let’s ask an ivory tower ostrich, with her head in the UCAL sand:

As generations pass, towns like Watsonville will become more Americanized, but at the same time some parts of Mexican culture are already weaving into the U.S. fabric, said University of California, Irvine sociologist Susan Brown.

She points to salsa, which long ago surpassed ketchup as the nation’s leading condiment. And Brown said American icons like hot dogs and hamburgers are actually the legacy of a wave of more than 5 million German immigrants more than a century ago.

“This Mexican wave is a big group,” said Brown, “but we forget that a huge, huge number of Germans came, and we’ve absorbed them.”

Yes, of course! German immigrants from 100 years ago were just like (and brought the same value system and value-added skill sets) as illegal, uneducated, low-skill, high fertility, Mexican migrants today.

This entry was posted in CA, Immigration, Mexico. Bookmark the permalink.