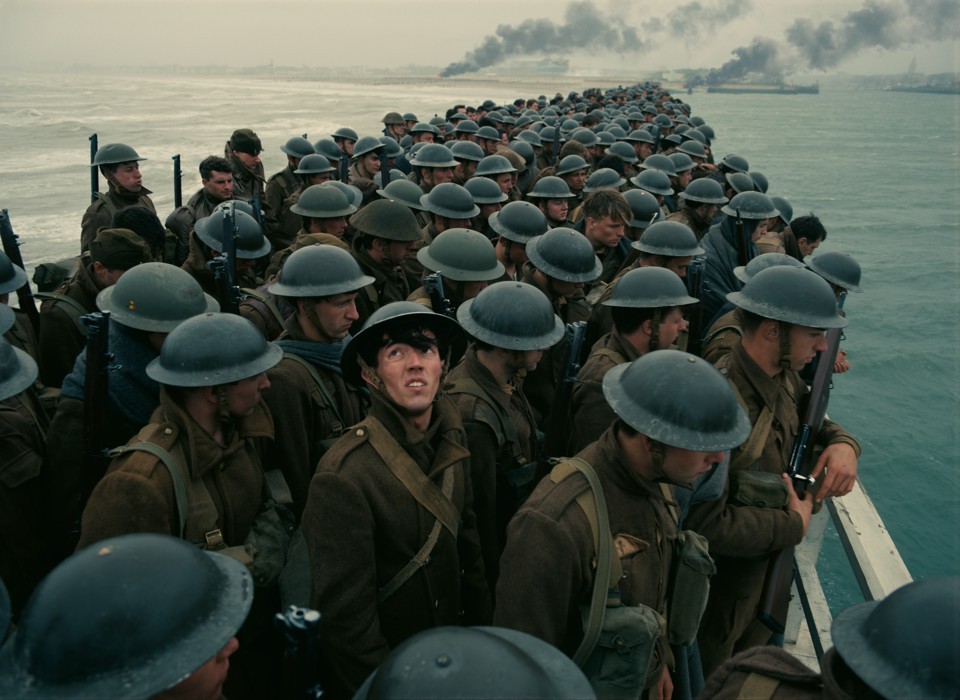 Christopher Nolan’s Dunkirk might just be a masterpiece.  Despite its $150 million production, and all the temptations that surely must come with such a budget, the film is a measured study in minimalism — in sound, vision, and storytelling – all oriented towards being a paean to Englishness and an elegy to England. Despite the film’s title, Dunkirk is not a blow-by-blow depiction of the events leading up to the massive evacuation of 400,000 primarily British troops from French soil, after they’d been pinned by the Germans, but is about… an England that once was.

Nolan’s personal connection to the events of WWII are revealed in a recent interview he gave:

Like many Britons of his generation, Nolan grew up with stories about Dunkirk in his household, where the specter of the war loomed large. “My grandfather was in the Air Force,” he said. “He did not participate in Dunkirk; he was a navigator in Lancaster and he died in the war.”

Nolan visited his grandfather’s grave, outside the French city of Lyon, while he wa in pre-production for “Dunkirk.” That connection was one of a few ways that the movie — his 10th feature, and his first British production since his 1998 debut “Following” — was his most personal to date.

“I try to only make films that I feel very connected with on some emotional level,” he said. “This is the first time I’ve taken on a real-life event, and there’s a huge responsibility that comes with that. But I suppose in some ways feel more personal.”

To the red-pilled viewer, what becomes immediately clear is the ethnic nationalist aspect of the film. Steve Sailer notes:

Dunkirk is a nationalist masterpiece. The Anglo-American Nolan (his father is English, his mother American) is an English nationalist, a reactionary elitist slightly to the left of Viscount Castlereagh and slightly to the right of the Duke of Wellington.

This film is a masterpiece, and Christopher Nolan is one of our greatest living directors.

Naturally, those humorless culture-killing religious fanatics of the diversity cult are complaining that Dunkirk is too white and too male, since not only must white men be engineered out of England’s future, they must be airbrushed out of her past. But Leftists are right to dislike this film. Unlike virtually every other movie about the Second World War, Dunkirk does not serve as propaganda for multiculturalism. It is not a movie about those dirty, Jew-killing Germans, whose deeds — we are constantly told — are somehow the refutation of every nationalistic sentiment, even in the people who fought against them.

Instead, Dunkirk is a movie about England. It is a movie about coming home. It is about the patriotism, social solidarity, ingenuity, hard work, and bravery of countless humble white people whose primary mistake was to trust the leaders who delivered them into two World Wars and are now overseeing their replacement with the scum of the Third World. Leftists fear Dunkirk because it gives white men a glimpse of a nice white country we could someday restore, and the virtues we must find again if we are to defeat the real enemy this time.

In, of all places, National Review, Max Bloom responds to Johnson’s brief but salient review with a piece titled “Dunkirk and Our Crisis of National Identity”:

Perhaps it is unsurprising that the alt-right would like Dunkirk. It is not an ideological film, but it is a patriotic one: a celebration of England, and of Englishmen helping other Englishmen. Arguably, its central theme is that of obligation to country, not out of ideological concerns — Nazism is never once mentioned — but out of duty to one’s countrymen. Its most moving scenes are powered by the attachment the English soldiers feel to their homeland: a general declaring to a subordinate that he can almost see Britain from the beaches of northern France, soldiers gazing at the White Cliffs of Dover from a rescue boat returning home.

It’s not hard to understand how this celebration of national attachment, through no fault of Christopher Nolan’s, could be taken as “a glimpse of a nice white country we could someday restore” by alt-righters. The sentiment is racist and obnoxious, but it does get at the film’s unique patriotic zeal, which has not gone unrecognized by liberal critics, either.

There’s a parallel here with the bizarre critiques that Trump’s Poland speech, which defended Western civilization as something unique and special, elicited from libs and cucks alike: Defending the West is, in the last instance, tantamount to defending the accomplishments of a race. Given this inherent logic, a film about defending the very white England of 1940, must be seen as extraordinarily racialist.

Nolan seems to have flown under the radar, partly by eliminating virtually all dialog and hence minimizing the chance of jarring Politically Correct sensibilities…

Quietly, possibly inadvertently, he has made a movie that celebrates national identity.

He does this simply by showing a real nation in action.

Depictions of the dastardly Nazis is non-existent, which allows Nolan to lose the quite heavy moralizing baggage that comes with any WWII movie involving the Germans. By referencing them throughout the film not as “Nazis” or “Germans” but as simply “the enemy”, Nolan extends and universalizes the nature of the English people’s collective struggle, projecting it, I would argue, right into our current time. In scenes like the ‘target practice’ ordeal, one can imaginatively transplant the said ‘enemy’ to be Muslim invaders or a future Antifa. (In a recent podcast discussing the film, Greg Johnson aptly notes how the British could have been fighting space aliens, for that matter, and it wouldn’t have changed the film’s focus on British national identity.)

There is a nary a minority in the film. Except for a few seconds in a panning shot, which shows a couple of black French soldiers, the film’s subjects are entirely white. Despite its historical demographic accuracy, there is no shortage of feminists expressing their dismay at the lack of women in the film (although there are scenes involving female nurses), nor of P.C. types bemoaning the lack of minorities in the film.

Most of the characters in Dunkirk have no names (e.g., Cillian Murphy is billed simply as the “shivering soldier”, etc.), adding to the collectivity element, an exception being the classically trained actor Kenneth Branaugh, who provides something of a gravitas or ‘Great Man’ reference point to classic filmmaking and the Shakespearean tradition. (The moment when he says “I can see home” is quite moving.)

Technically, many of Nolan’s establishment shots have a Kubrickian composition, which are glorious in 70mm. The film is purposefully loud, it’s aural qualities having a central role in the experience of the film. A minimalist industrial score by Hans Zimmer, and one which deploys what sounds like a million staccato violins, effectively utilizes the Shepard Tone, which itself serves to emphasize, along with the diegetic sounds of roaring machines and explosions, the mechanical ruthlessness of war. (In the aforementioned podcast, Johnson describes the film’s aesthetics as an avant-garde accomplishment, reminiscent of the Italian Futurists, as well as King Vidor’s 1928 film The Crowd.)

By the end of the film, Hans Zimmer’s industrial score has transitioned into Sir Edward Elgar’s Enigma Variations (the “Nimrod” variation), Elgar being a preeminent Victorian era British composer.

The film’s third act contains some of the most profound moments of cinematic catharsis I’ve ever experienced.  There’s an effective sequence towards the end of the film involving a young soldier reading Churchill’s famous ‘We shall fight on the beaches’ speech from a newspaper, a strategy which delivers a surprisingly fresh emotional resonance to the speech’s words, and one that avoids the cliché of having the words inadvertently overshadowed by yet another actor playing Sir Winston. (By moving away from WWII’s “Great Men” approach, Nolan allows us to truly appreciate the efforts and sacrifices of the common man.) I was particularly moved by the scene where we see an obituary written for a young boy, whose unfortunate fate we’ve witnessed earlier in the film, describing him as a “war hero”.

En toto, the film is ripe for decoding. Might the different instantiations of ‘taking on water’ symbolize the contemporary issue of mass immigration into England ‘drowning’ its identity? Might the French soldier, who has dressed as a British soldier, hoping to flee to Britain, but who drowns in the flooding hull of a wrecked ship, symbolize how France itself is ‘drowning’ due to third world (primarily Muslim) immigration? Sustained exegesis of Nolan’s Dunkirk, particularly in lieu of the emergent reactionary political philosophy which lurks in Dark Knight trilogy, may be rich in important symbolism.