When you hear the term ‘fake news’, do you think of a typical NYT headline about Trump?

With their hold on communicative, narrative-forming power at risk, the MSM (and, by extension, the Democratic Party) is embarking upon a radical new pogrom: they are beginning a full fledged assault against alternative media.

Their first target is the so-called ‘fake news’ threat. Implicit in their alarm is a deterministic cause-and-effect relationship between ‘fake news’ posts on FB (and Twitter) and the election results the Establishment didn’t want to see. (That there a significant amount of ‘fake news’ in the NYT, CNN, NPR, et al, is of no concern to them.)

The attack will begin with FB and Twitter, where private ownership (by liberals) of the social media platforms will provide minimal resistance. The likes of Zuckerberg won’t have a problem shutting down ‘hate speech’ and the like, as was seen in Twitter last week.

And it won’t stop there. The jihad against alternative media will continue.

At the moment, I am optimistic about the dialectic happening here: the unintended consequence will be the further marginalization of liberal-owned media platforms. Alt Right media platforms, and libertarian owned platforms, will flourish as a result, hastening the trajectory we feel in our gut right now. 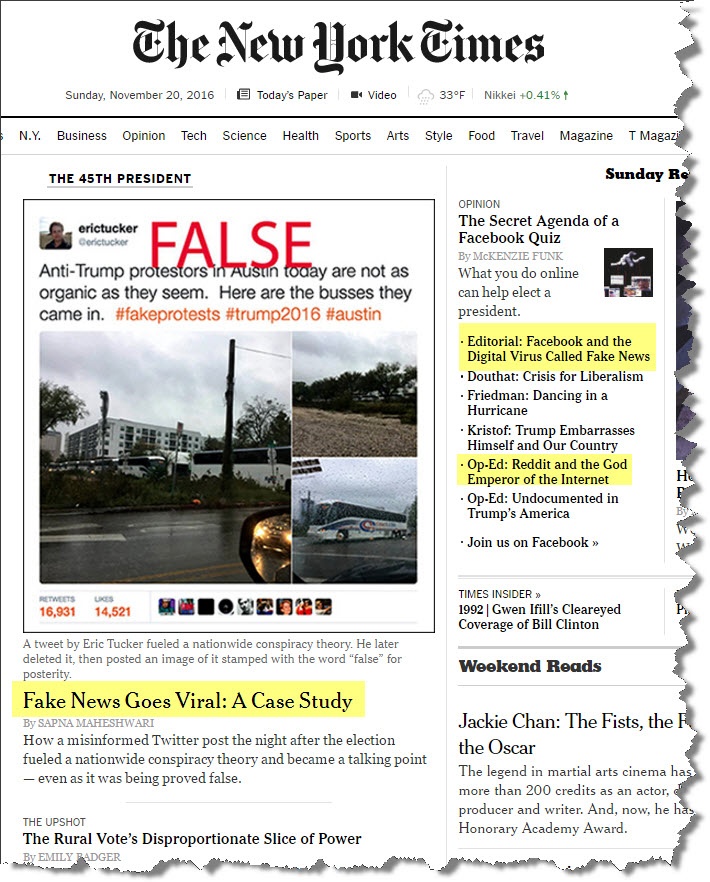 This entry was posted in Alt-Right, MSM, NYT. Bookmark the permalink.