Of the Ferguson circus, I am absolutely convinced that the ‘silent majority’ of whites (across the political spectrum) are rolling their eyes at the MSM’s predictable and Dionysian, orgiastic coverage.

The media’s focus on the conflict ensures the “country is being polarized by watching this,” Buchanan told The Daily Caller.

“I don’t think that that is going to be helpful to the party of Rev. Sharpton or Jesse Jackson,” said Buchanan, who is now a columnist.

“I think the riots and the violence and the looting are going to cause a lot of folks to recoil from those who appear to be condoning those sorts of act… there is no question about it,” he said.

Many Americans will remain silent amid the media furor, until they can vote, he said. “A lot of people just watch these things, observe quietly and talk with each other… [and] I think you will see it at the polls” in November, he stated.

“The silent majority will react as it always does — it will recoil [from] the cursing, the hollering, the obscene gestures, the assaults on police, the looting and vandalism,” Buchanan observed.

The dispute may boost turnout by Obama’s base, but it will also turn out his opposition, Buchanan said.

“The polarization is not going to be beneficial to the president,” he warned.

Elsewhere, in his recent column (“Is Ferguson Our Future?“), Buchanan writes:

Then there is the rival vision of America rooted in a separate reality. It is that in America today, police, like Darren Wilson, are the first responders and last line of defense, willing to risk their lives battling the criminal elements that threaten us and our free society.

Moreover, violent crime in America—assault, murder, robbery, rape—emanates disproportionately from the black community, and especially the young male members of that community.

Crime rates, conviction rates, incarceration rates all testify to this truth. If cops are more on guard when encountering black males, is it not because, given the crime statistics, they have more to fear from them?

Steve Sailer has been routinely tossing off astute observations on the matter. Of the DOJ’s attempt to suppress the convenience store video:

It’s a simple concept: any found footage that undermines the Democratic-Media Narrative Complex storyline of the moment should never see the light of day. The public deserves to be protected from any Doubts.

Of the third autopsy that the DOJ is conducting (the DOJ’s 2nd autopsy):

Please note how much “projection” is going on: We all know that conspiracy theories are espoused only by fringe wackos in dingy RVs. Yet, here is the Obama Administration running with the working hypothesis of some kind of a conspiracy to cover-up the results found by both the state’s coroner and by a private pathologist hired by the grieving family. Indeed, this conspiracy to cover-up the truth is so multi-tentacled that leaders of the federal Department of Justice must wage a twilight war against this vast rightwing conspiracy by conspiring amongst themselves to cover up all the material evidence it can get its hands on such as the store security footage of Brown getting violent with a clerk and the results of the previous autopsies. It’s a dirty job but somebody has to do it.

Of the Ferguson riots’ benefit for Democrat politics and election strategizing:

The Democrats have made clear in recent months that their strategy for the November elections is to encourage black turnout by ginning up racial rage against whites. To you and me who are familiar with the homicide statistics, the Administration’s and media’s campaign to convince volatile black potential voters that their boys are being hunted down and slaughtered en masse by white racists may sound like lunacy of the most dangerous sort.

But there are some very sharp people among the Democrats, and Michael Brown’s death was a gift to them. Unfortunately for them, the video of Brown engaging in hotheaded criminality moments before his death is deflationary toward their pyramid of paranoia.

Whatever short-term gain Dems get among blacks (to just show up and vote) from the Ferguson circus will (one hopes) be more than offset by sentiments from various non-black demographics. From a recent Rasmussen poll (see corollary findings from Pew here):

Fifty-seven percent (57%) of black adults, however, think police officer Darren Wilson should be found guilty of murder, compared to just 17% of whites and 24% of other minority Americans. Most whites (56%) and a plurality (49%) of other minorities are undecided.

A similar racial divide could be seen throughout the trial of George Zimmerman who shot and killed a black teenager in Florida in 2012 and was subsequently found not guilty in a jury trial.

When it comes to the mob violence that has occurred in Ferguson since the shooting, 25% of Americans think it has been primarily legitimate outrage over what happened. But 52% think it has been mostly criminals taking advantage of the situation. Another 23% are not sure.

Despite the incident being still under investigation (with all the evidence collected and analyzed, etc.) blacks have already made up their minds. They don’t need no stinkin’ evidence. This is why Johnnie Cochran wanted (and got) an almost all-black jury, and why he regularly wore African tribal ties during the trial of O.J. Simpson.

To blacks, racial solidarity (sticking together) is more important than the objective facts of a specific case. Plus, as a whole, they are a group that is ‘deductive reasoning-challenged’.

I, for one, welcome this Ferguson circus and the next one we will certainly get in due time… and the one after that.

It is exacerbating the sentiments of the ‘silent majority’ of whites in this country, and thereby improving the odds a white consensus on racial matters coalesces… before (immigration-wise) it is too late. 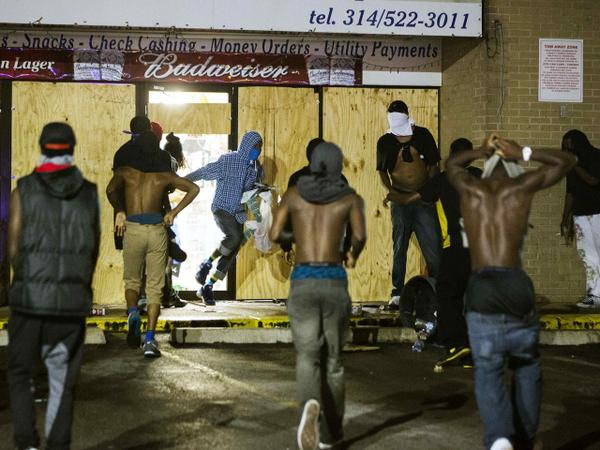 This entry was posted in Anti-White, Black, MSM, Race. Bookmark the permalink.