“Donald Trump’s Social Media Ties To White Supremacists” is the article title in Fortune magazine. “It’s more than just a couple of retweets,” reads the byline. 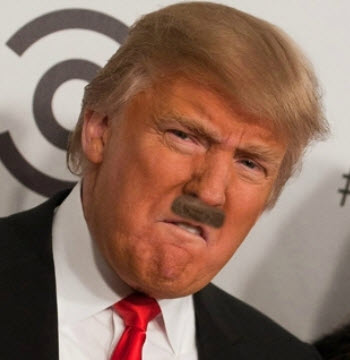 In late January, Donald Trump did something that would have sunk almost any other presidential campaign: He retweeted an anonymous Nazi sympathizer and white supremacist who goes by the not-so-subtle handle @WhiteGenocideTM. Trump neither explained nor apologized for the retweet and then, three weeks later, he did it again. This subsequent retweet was quickly deleted, but just two days later Trump retweeted a different user named @EustaceFash, whose Twitter header image at the time also included the term “white genocide.”

None of this went unnoticed among ardent racists, many of whom believe there is a coordinated effort to eventually eliminate the “white race.”

Trump is “giving us the old wink-wink,” wrote Andrew Anglin, editor of a white supremacist website called The Daily Stormer, after Trump retweeted two other “white genocide” theorists within a single minute. “Whereas the odd White genocide tweet could be a random occurrence, it isn’t statistically possible that two of them back to back could be a random occurrence. It could only be deliberate…Today in America the air is cold and it tastes like victory.”

It is possible that Trump ― who, according to the campaign, does almost all of his own tweeting ― is unfamiliar with the term “white genocide” and doesn’t do even basic vetting of those whose tweets he amplifies to his seven million followers. But the reality is that there are dozens of tweets mentioning @realDonaldTrump each minute, and he has an uncanny ability to surface ones that come from accounts that proudly proclaim their white supremacist leanings…

While the above use of the term ‘White Genocide’ is metaphorical, absolutely nowhere in the piece is there any discussion about the where the term originated, namely, the literal genocide against whites taking place in South Africa today.

Elsewhere in the piece is this:

Even the Twitter account for @USAFreedomKids, the young girls whose performance for Trump in Florida became a viral sensation, follows 13 of the top 100 #WhiteGenocide influencers, plus another account that promotes a pro-Hitler documentary called The Greatest Story Never Told.

I’d never heard of “The Greatest Story Never Told”, so I Googled it.

From the official website for Adolf Hitler: The Greatest Story Never Told (2013):

This ground-breaking documentary chronicles the rise of Germany from defeat in World War I, to communist attempts to take over Germany; hyperinflation during the Weimar Republic, widespread unemployment and misery, and Adolf Hitler’s rise to power.

It also reveals a personal side of Adolf Hitler: who he was, his family background, his artwork and struggles in Vienna and what motivated him to come to power.

There’s so much hidden history to recount; FDR Pearl Harbor conspiracy, Soviet brutality, betrayal and treachery on all sides. Do we really know the true cost of war? Do we really possess all the facts?

Watch this series and uncover the real root causes of World War II.  Do your own research and decide what you choose to believe. Think differently.

You can watch the film for free on the official website or via Archive.org.

I haven’t watched any of it yet. If and when I get around to it, I’ll post a review.

This entry was posted in Anti-White, Republican Party, White Identity. Bookmark the permalink.