Some ideas are so terrifying they can only be the product of navel-gazing, utopian academics. “When Free Speech Becomes a Political Weapon” is by Kate Manne, assistant professor of philosophy at Cornell University, and Jason Stanley, professor of philosophy at Yale University. It is the feature piece in the current Chronicle of Higher Education, with a wonderful cover photo.

In the article, they defend the totalitarian tactics of BLM-types. The very title of their piece should scare the hell out of parents, whose kids are taught at these uber-liberal universities… err, I mean at these universities where ill-defined ‘institutional racism’ is apparently rampant. 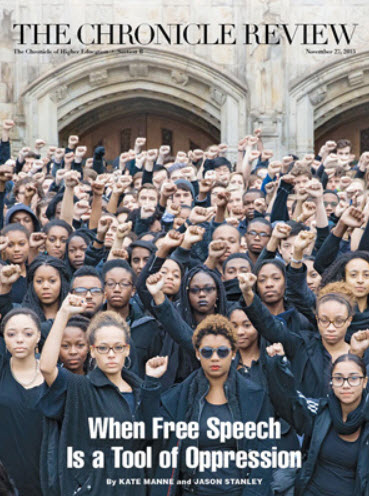 The notion of freedom of speech is being co-opted by dominant social groups, distorted to serve their interests, and used to silence those who are oppressed and marginalized…

But sounding reasonable can be a luxury. Such speech trusts, even presumes, that one’s words will be received by a similarly reasonable, receptive, even sympathetic, audience. Oppressed people are often met with the political analogue of stonewalling. In order to be heard, they need to shout; and when they shout, they are told to lower their voices. They may be able to speak, but have little hope of being listened to.

The Michigan State University philosopher Kristie Dotson describes this predicament as “testimonial quieting,” as the philosopher Rachel McKinnon has helped us to see. When oppressed people speak out — and up, toward those in power — their right to speak may be granted, yet their capacity to know of what they speak doubted as the result of ingrained prejudice. And the way in which they express themselves is often then made the focus of the discussion. So it is not just that these people have to raise their voices in order to be audible; it’s also that, when their tone becomes the issue, their speech is essentially being heard as mere noise, disruption, commotion. Their freedom of speech is radically undercut by what is aptly known as “tone policing.”

This entry was posted in Academia, Black, Political Correctness. Bookmark the permalink.