From a recent FNC interview with the two alpha jews of Kiss, promoting their new book Nothin’ To Lose: The Making of Kiss (1972-1975):

Simmons: Ace took me to lunch before his book came out and he read me a chapter about how he almost drowned in a pool and I saved him by diving in and pulling him out. He asked if it was accurate. I said, ’95 percent of it was accurate, except it wasn’t you; it was Peter Criss who was drowning. You’ve been a f**king drug addict all of your life. Both Peter and Ace were at one point pure, innocent, believed all for one, one for all, and then they succumbed to the clichés of rock. So neither Ace nor Peter were fully conscious when any of those things happened. It’s up to yo 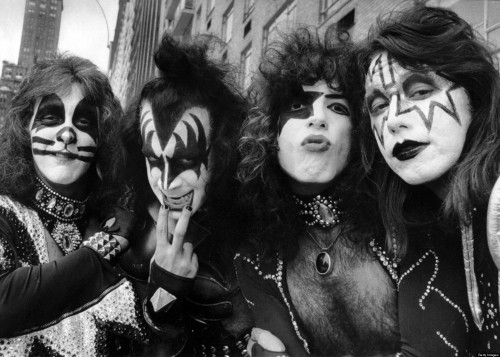 u if you want to believe them. We wish them the best, but those books, to my estimation, they’re closer to fiction.

Stanley: The fact remains from what I’ve seen of those books, they clearly still see themselves as victims, and when you can’t take responsibility for your situation, you blame others. The proof is what they have done outside of the band and it amounts to a big zero. I would say nothing if they had not said something first. I certainly wish them well and you can’t help but believe that they’re incredibly envious of the success we’ve had without them, which was part of the problem in the first place. If somebody thinks they’re irreplaceable they’re either completely deluded, stupid, or intoxicated. In their case they abused their position in the band under the assumption that they were the only people who could do what they do, and here we are 40 years later playing arenas and venturing into areas most other bands would find impossible, like having an AFL football team, the first new football team in L.A. in decades, LAKISS, which will play in Anaheim.