While my Netflix was on pause today, it went into screensaver/Netflix promo mode, and up popped this image promoting the 4th season (who knew?) of a Netflix original ‘comedy’ called Grace and Frankie, created by Marta Kauffman and Howard J. Morris. 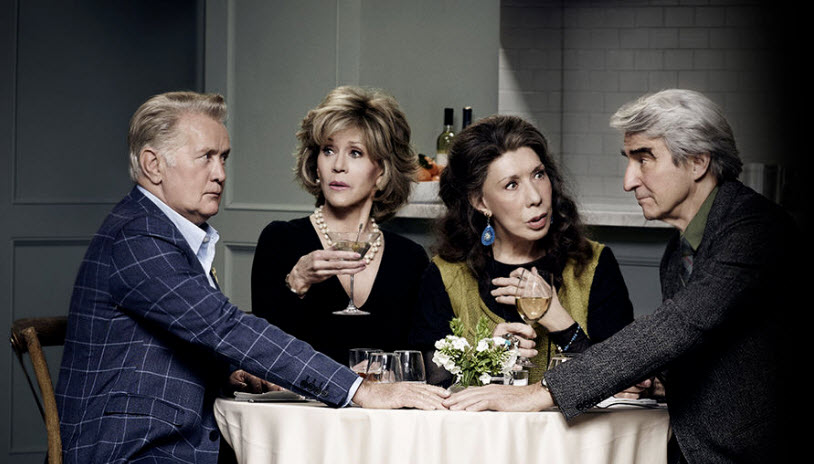 From the image alone, we can pretty much guess the show’s premise, write the scripts, and envision the ‘jokes’ ourselves.

Christ, watching these far left geriatric hacks belatedly try to hitch their fading wagons onto the aughts-trendy subgenre of gays-in-sitcoms, while simultaneously trying to communicate how ‘with it’ they are, has got be a special level of Dante’s Hell. From Wikipedia:

The series follows Grace, a retired cosmetics mogul, and Frankie, a hippie art teacher, whose husbands, Robert and Sol, are successful divorce lawyers in San Diego. Grace and Frankie’s lives are turned upside down when Robert and Sol announce that they are in love with each other and are leaving their wives. Now, the women, who have never particularly liked each other, are forced to live together and learn to unite and cope with difficulties.

How much do you want to bet that, of the 4 characters, Jane Fonda is the most uptight and WASPy? Or that Lily Tomlin, who plays a hippie art teacher, is the quicker to both accept and celebrate her husband’s homosexuality?

This entry was posted in Hollywood. Bookmark the permalink.