“Graceful in the Lion’s Den”

If there’s one thing the MSM creams over, it’s emotional symbols which represent their preferred Narrative.

Today, they are tripping over themselves to promote this ‘symbolic’ photograph of one Ieshia Evans: 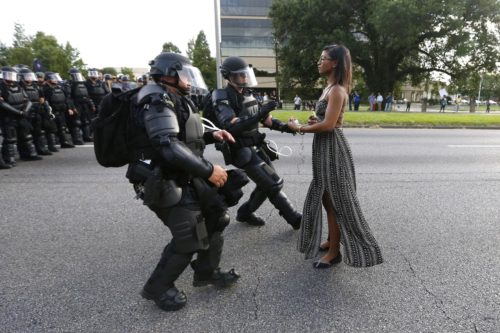 A demonstrator protesting the shooting death of Alton Sterling is detained by law enforcement near the headquarters of the Baton Rouge Police Department in Baton Rouge, Louisiana, U.S. July 9, 2016. REUTERS/Jonathan Bachman

They’re pushing the meme all over the place: NY Daily News, BBC, Time, CNN, The Atlantic, etc. Much of the time the writers in these pieces are Tribe members (Joshua Berlinger, Yoni Applebaum, etc.)

Upon photos like this becoming ‘sexy’, MSM hacks, fueled by a sense of righteous indignation, then invariably display their own literary aspirations, such as Michael Miller’s (news) piece in WaPo, which begins:

She was the calm at the center of the storm, a storm spreading across the country.

The young woman stood silently on the cracked asphalt, her summer dress billowing in the breeze.

Around her swirled a kinetic mix of police officers and protesters…

The young woman’s stoic pose drew comparisons to Rosa Parks’s refusing to give up a seat at the front of a segregated bus or “tank man” facing down war machines in Tiananmen Square.

Some likened her to a modern-day Statue of Liberty, guiding a bitterly divided country back toward the proper path.

Others called her a “superhero.”

“She looks graceful in the lion’s den,” writes one fan.

On her own FB page, Ieshia reacts to the glowing media attention lapped on her by writing:

“To all of my friends and acquaintances please don’t do any interviews about me,” said a post two hours later. “If they want my story, I am here. I would like the opportunity to represent myself! Thank you. Peace, love, blk power! ‪#‎blacklivesmatter.”

And that pretty much says it all.

This entry was posted in Black, MSM. Bookmark the permalink.