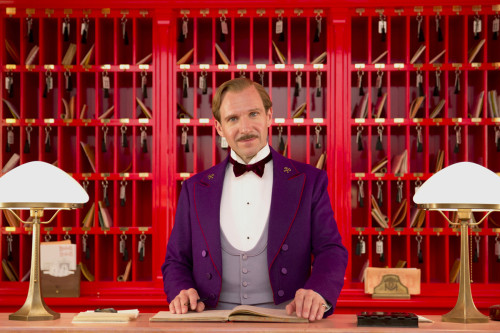 I finally got around to watching Wes Anderson’s Grand Budapest Hotel (2014) and found the film, while not his best, to nonetheless be one of his better ones, and a satisfying experience that I expect will get better with age and repeated viewings. Anderson has further refined his signature visual stylizations in Grand Budapest Hotel, with a pronounced and deliberate fakery of backdrops and other props (especially miniatures) leading to a beautiful, fairytale visual representation of childhood nostalgia. The film is set in the fictional Republic of Zubrowka, which resembles a Mitteleuropa, Austro-Hungarian Empire-era Prague, and, as a title at the end credits notes, is inspired by the work of the Austrian Jewish writer Stefan Zweig.

Monsieur Gustave, the film’s protagonist, is played perfectly by Ralph Fiennes, whose acting turn here is a natural for the Wes Anderson school of requisite comic timing.  F. Murray Abraham is wonderful in his smaller, but no less critical role of the elderly version of Zero Moustafa, who as a boy was Monsieur Gustave’s lobby boy.

There’s nothing in The Grand Budapest Hotel to suggest Gustav’s ethnic background, although his indifference to and ignorance of Catholic ritual is evident. Noticeable too is his reflexive use of the epithet “fascist”—the only time anyone in the movie employs the term. As perversely proper as he is, the concierge demonstrates an unexpected sympathy for his young protégée, the hotel boy Zero Moustafa, once he recognizes him as an orphaned, stateless refugee. (The lad’s Muslim name suggests that he comes from the Balkans or Caucasus, although he is also the sole survivor of a massacre recalling the Armenian genocide.)

The use of a hotel or sanitarium as a metaphor for Central Europe is a venerable tradition: Thomas Mann’s The Magic Mountain may be the greatest example, but Bohumil Hrabal’s I Served the King of England and Joseph Roth’s Hotel Savoy are also notable. Vicki Baum, like Roth and Zweig a German-speaking Jew, invented many of the clichés with her Grand Hotel (the source of innumerable ’30s movies); the Hotel Occidental in Kafka’s Amerika is suspiciously mitteleuropean, and even Sholem Aleichem wrote an epistolary novel, Marienbad, about Polish Jewish alrightniks swanning around a Czech spa that, as one writes to his wife in Warsaw, has “gone downhill since the British King Edward died several years ago.”

The film’s eccentric lightheartedness cloaks an underlying darkness, however, particularly when towards the end of the film, we see a thinly veiled reference to a Nazi occupation. In this context, Monsieur Gustave’s fate is evocative of Guido’s (Roberto Benigni) in Life is Beautiful (1997).

The Austrian-Jewish novelist, biographer, journalist and playwright left Austria in 1934 and— eight years later — in despair at Europe’s self-destruction, committed suicide together with his wife in exile in Brazil. One of the most translated writers in the Europe of his day, he has been largely neglected in the English-speaking world for the past several decades, although some of his works have been republished in English in the past few years. Zweig’s writings, especially his autobiographical ones, are tinged with yearning for a vanished world. Intimately knowledgeable about the uprooted and the lost, he is a poet of exile and nostalgia.

“I think people in Europe are surprised that we don’t know this writer,” Anderson explained. “They all know him. In France, certainly in Germany, he’s enormously popular. And I read this book ‘Beware of Pity.’ It’s the first one I read a number of years ago and I loved it immediately, from the first page. And I started reading all his fiction and his wonderful memoir, ‘The World of Yesterday.’ Our story is not based on any of his stories but… my intention was to sort of do our own version of a Zweig story,” he continued.

Anderson’s detractors claim that he is too fussily obsessed with detail and that his films are hopelessly detached from reality. “Grand Budapest,” with its carefully orchestrated whimsy, is not likely to win him new converts. However, the tribute he pays his inspirations with this remarkably firm and confident vision seems sincere and adds an emotional depth that is at times lacking from his other work.

This is a pretty good summation of general public reaction to Wes Anderson’s work.

I, for one, absolutely love Wes Anderson’s aesthetics. I love the look of his films; the eccentricity of his films’ characters, especially when properly cast with the right actors; the recurrent themes of childhood passed and the nostalgia therein; and the wonderful blend of dry comedy with judicious elements of pathos.

Grand Budapest Hotel is one of his better films, topped (in my opinion) by The Life Aquatic (2004) and his masterpiece The Royal Tenenbaums (2000).