A millionaire Hasidic real estate developer (aka ‘slumlord’) is murdered. His community rallies to defend his reputation. But even the NYT feels compelled to mention how… well… stereotypically Jewish the victim behaved as a Brooklyn landowner (“A Developer Is Mourned and Vilified in Brooklyn“):

But if Menachem Stark’s name was synonymous with generosity and good deeds within his community, the developer had acquired an unsavory reputation outside it, his business dealings growing in complexity and controversy as he opened new buildings in the hot real estate markets of Williamsburg, Bushwick and Greenpoint… 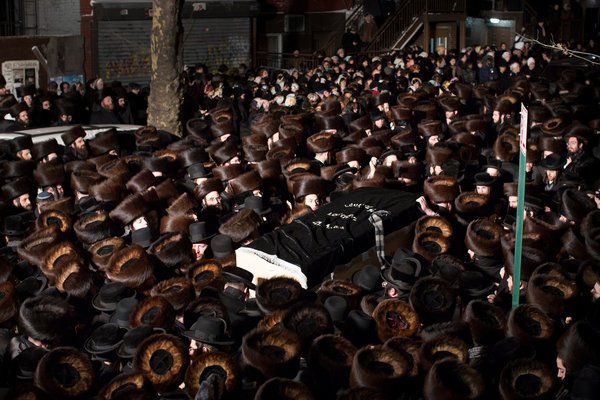 Mourners carry the coffin of Menachem Stark at his funeral.

But the developer, who often went by Max, had become a lightning rod for fuming tenants and neighborhood activists across north Brooklyn, where Mr. Stark had owned more than a dozen residential properties. Such dealings landed Mr. Stark on the cover of The New York Post on Sunday, with the headline “Who didn’t want him dead?”…

At 239 Banker Street, a former factory Mr. Stark converted into trendy lofts, the building racked up a series of serious violations, including lacking a certificate of occupancy and working without a construction permit. In September 2009, after an inspector found workers had plastered over fire sprinkler heads, the city ordered the building vacated. Residents tried to contact Mr. Stark to recover their security deposits, but lost them when he proved elusive, they said.

When the building reopened in 2012, violations continued to accrue. So did problems with wiring and heating.

Court records show that Mr. Stark and Mr. [Israel] Perlmutter were sued several times after defaulting on major loans, including a $29 million loan for a Williamsburg property. In 2009, they declared bankruptcy.

The aforementioned NY Post article has a bit more ‘read between the lines’ context about Stark:

“Any number of people wanted to kill this guy,” one law-enforcement source said of Menachem “Max” Stark, 39, describing the father of eight as embroiled in several “shady” real-estate transactions and being up to his tuchus in debt.

“He owed a lot of people money,” said another source.

But his debts weren’t Stark’s only troubles, say investigators, speaking on condition of anonymity. Although many neighbors described him as well-liked and charitable, Stark left behind a trail of angry tenants from more than a dozen residential properties, mostly in Greenpoint and Williamsburg, along with an untold number of unpaid contractors and angry business associates, investigators said…

“He was involved in shady business deals, was known to carry around a lot of money and had a sealed arrest for forcible touching” in his past, one law-enforcement source told The Post.

The alleged victim was a young teen girl, said the source, declining to give further details.

“He’s a Hasidic Jew from Williamsburg, and we think he’s a scammer,” another investigator said of Stark, who had defaulted on more than $30 million in real-estate loans in recent years and owed tens of thousands in penalties for building violations.

“He f–ked over a few people,” the source added.

At the time of his death, Stark owed tens of thousands of dollars in penalties for 148 Department of Buildings violations on his 17 properties, public records show.

“He owed me some money on a job I was doing for him, and he told me to go f–k myself,” one Williamsburg contractor told The Post of his dealings with Stark, who was notorious for bouncing checks.

“I’ve had many conversations with him, and of course in many of those conversations I wanted to kill him,” joked Greg Hanlon, who lived in a Stark-owned building in Clinton Hill.

A Stark building at 239 Banker St. in Greenpoint  was so decrepit, the city issued a vacate order in 2009 — and numerous tenants were left to chase Stark down in futile efforts to retrieve the four-month deposits Stark had demanded of them, one tenant organizer said.

The building went into foreclosure shortly after.

“He pretty much ripped off the whole building,” said the organizer, Ryan Kuonen. “They kept trying to serve him, and he kept hiding from them. When he’d hear ‘Are you Max Stark,’ he would take off running.”

Investigators are finding a pattern of shady dealings in which Stark would acquire properties and then “lose” the properties by failing to pay his mortgage and improvement loans, sources said.

The properties would then be snapped up at bargain basement prices by family members and associates, one law-enforcement source said.

This entry was posted in Crime, Jewish. Bookmark the permalink.