How Many Whites Feel “White Guilt”?

In ”How Many People Actually Feel ‘White Guilt’?”, George Hawley, professor of political science at the University of Alabama, takes a look:

We can… discern whether “white guilt” is actually something a large number of white Americans feel.

Once again, the 2016 American National Election Studies pilot study can provide some insights. The ANES is always one of the best resources for public-opinion scholars, but this year I was delighted to see that it included a trove of great questions relating to racial attitudes.

There are lots of useful items on that survey, and on the larger 2016 ANES, but the questions specifically focused on white guilt were both interesting and novel. The survey asked the following three questions: “When you learn about racism, how much guilt do you feel due to your association with the white race?”; “How guilty do you feel about the privileges and benefits you receive as a white American?”; and “How guilty do you feel about social inequality between white and black Americans?” I hope we continue to see questions like this in major surveys in the future.

It turns out that only a minority of white Americans admit to feeling any kind of guilt about race. No matter how the question was framed, a substantial majority of whites stated that they felt literally no racial guilt.

This is surprising because, when surveyed, whites have a tendency to exaggerate their liberalism on racial questions. A negligible percentage of white Americans will admit agreeing with transparently racist sentiments, which is one reason many surveys no longer even bother asking questions related to so-called old-fashioned racism. When trying to tease out racist attitudes among whites, public-opinion surveys have increasingly relied on indirect measures, questions designed to measure so-called “symbolic racism” or “racial resentment.” Thus, even though I believe that most white Americans do not really feel guilty about race, I did expect more to at least pretend to do so. 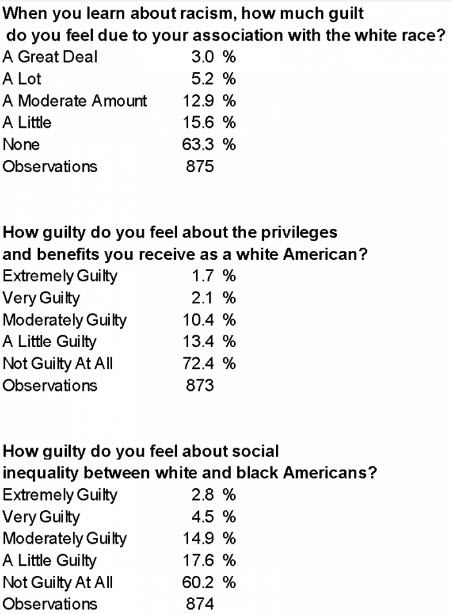 Given the small sample size, I hesitated to slice these data up much more, and I must caution against drawing strong conclusions after doing so. But it is worth noting that there does appear to be an age gap on this question—whites under 30 were much more likely to admit feelings of racial guilt. But even for the youngest whites, zero feelings of guilt remained the modal response. This was even true of young whites that supported Bernie Sanders.

Not surprisingly, support for Trump in the GOP primaries was strongly correlated with these responses. For each iteration of this question, less than 1 percent of Trump’s primary supporters felt the highest level of racial guilt. In fact, for the question about white Americans’ “privileges and benefits,” not a single Trump supporter felt “extremely guilty.”