I’ve seen the film probably ten times, and each time I am continually knocked out by the film’s emotional depth and articulation of the timeless spirit of Christmas. 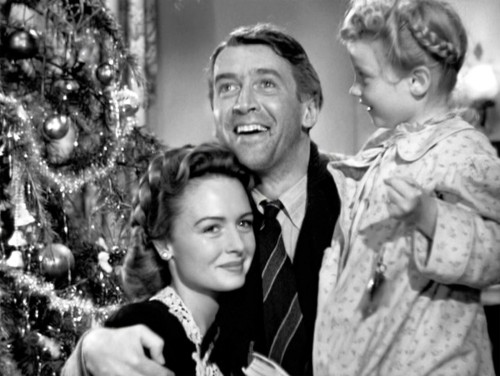 But, it’s got some problems — it’s offensive in its overt Christianity – which can hopefully be remedied with a sorely-needed Hollywood remake.

There’s offensive depictions of praying (George Bailey: “Lord, show me the way.”), references to angels and their desire to earn their wings, and even more specific, offensive references to the belief system of Clarence the Angel (Clarence looking skyward and asking “How am I doing, Joseph?”)

In the film’s final sequence, where George Bailey has achieved his Christ-like quest for salvation, his young daughter reveals her indoctrination by the state’s educational system, saying to her father, “Teacher says, ‘Every time a bell rings, an angel gets his wings.’”

Why is this film still shown every Christmas season?

Can’t we start a petition to ban it?

This entry was posted in Christianity, Culture Wars, Film. Bookmark the permalink.