“You’re doing theater when you should be doing debate!”, Stewart once scolded the hosts of CNN’s Crossfire.

What are we to make of a Comedy Central host’s repeated visits to the Oval Office, and a President who affords an inordinate amount of time with this host both on- and off-camera, if not in theatrical terms?

And it seems the Jonathan Stuart Leibowitz is himself not immune to the P.C. circular firing squad he’s aided and abetted the past 16 years. (“Jon Stewart Told Wyatt Cenac to ‘F*ck Off’ When He Was Challenged About Race“):

Cenac, who was a writer and correspondent on The Daily Show for over four years, spoke with Marc Maron on his “WTF” podcast about what it was like working with Stewart. Maron asked, “And you got along with Jon?” “Naw,” replied Cenac. While Cenac initially wanted to see Stewart as a father figure, he didn’t get that. What he remembers instead is a moment when Stewart screamed at him in front of the entire staff. “There had, in my experience, never been an explosion like that,” he said.

This happened back in the summer of 2011, when Stewart was roundly pillorying the 2012 presidential hopefuls, including one Herman Cain. He made fun of Cain by doing a “voice.” At the time Cenac was on a field assignment, and watched the bit from home. “I don’t think this is from a malicious place, but I think this is from a naïve, ignorant place,” he remembered thinking. “Oh no, you just did this and you didn’t think about it. It was just the voice that came into your head. And so it bugged me.”

Cenac, who was the only black writer there at the time, voiced his concerns during the writer’s meeting. “I’ve got to be honest, and I just spoke from my place,” said Cenac. “I wasn’t here when it all happened. I was in a hotel. And I cringed a little bit. It bothered me.” He wanted them to drop the bit and said that it reminded him of Kingfish, a character Tim Moore played on Amos ‘n’ Andy. He remembers:

[Stewart] got incredibly defensive. I remember he was like, What are you trying to say? There’s a tone in your voice. I was like, “There’s no tone. It bothered me. It sounded like Kingfish.” And then he got upset. And he stood up and he was just like, “Fuck off. I’m done with you.” And he just started screaming that to me. And he screamed it a few times. “Fuck off! I’m done with you.” And he stormed out. And I didn’t know if I had been fired.

By his own liberal standards, we can only conclude that Leibowitz is himself a racist.

Here’s a picture of Leibowitz with his winning, but not-so-diverse, writing staff at a past Emmy event: 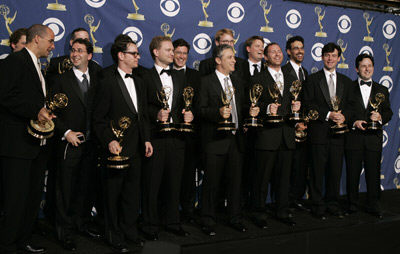 This entry was posted in Cultural Marxism. Bookmark the permalink.