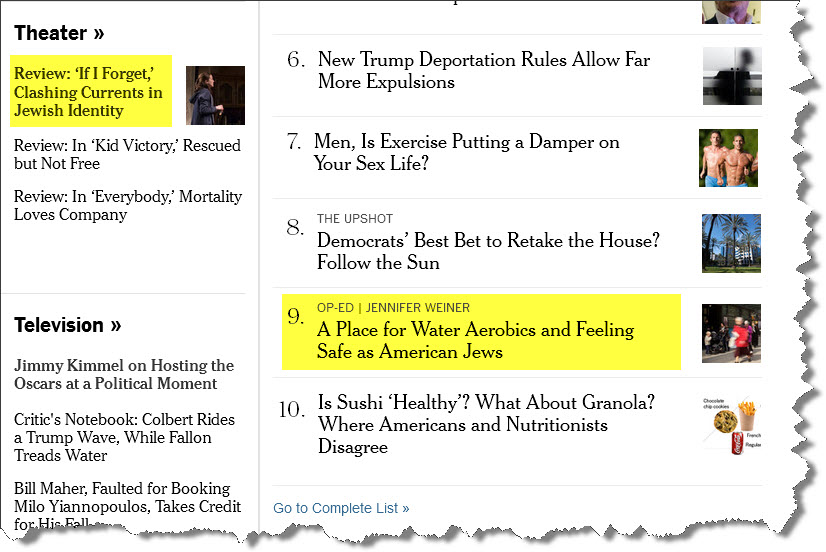 The first paragraph of the story about the play reads:

Steven Levenson’s passionate and provoking “If I Forget” is a family play, a political play and a kitchen-sink play. That kitchen definitely isn’t kosher, even though the family that gathers around it — the three adult children of an ailing father, Lou Fischer — are outspoken Jewish-Americans. Irritable and animated, the Fischers come vibrantly alive in this young playwright’s funny, bruising, searching voice.

Jews as ‘outspoken, irritable and animated’? If an Alt-Right person made the same (correct) ethnic characteristic observation, they’d be labeled an ‘anti-Semite’.

The Times reporter makes the obligatory ‘It’s 1933 again’ aside (“The current renewal of anti-Semitic rhetoric and the threats to Jewish spaces have only made the play’s quandaries ring louder.”)

Of the fictional Jewish family depicted in the play:

The Fischers are a mostly secular clan, and Mr. Levenson doesn’t deck them with Jewish markers — there are no skullcaps and no bagels, no briskets and no bris. These characters don’t kvetch or kvell, at least not in those terms.

The younger daughter, Sharon (Maria Dizzia), a teacher, used to take Lou to temple, but her observance has dwindled since she discovered her boyfriend and the cantor entangled on her new duvet. Her great regret: “Now I have to get it dry-cleaned,” she tells her brother, Michael (Jeremy Shamos). The older daughter, Holly (Kate Walsh of “Private Practice”), a homemaker and design hobbyist, goes to services only on High Holy Days. Michael, a professor of Jewish studies, doesn’t go at all.

If Michael is the least religious character, he is also the one most consumed by questions of Jewish identity. He has just finished writing an incendiary book arguing that the persistence of the Holocaust in the minds of American Jews has hollowed out Jewish life.

Michael, who hurls his words like so many Molotov cocktails, insists that the Holocaust has made contemporary Judaism “a religion and a culture of, frankly, death and death worship,” and recommends forgetting it. (This point and others owe a debt to Norman G. Finkelstein’s 2000 book, “The Holocaust Industry.”)

These claims don’t sit well with Lou, a World War II veteran who helped liberate Dachau. In a late-night conversation with Michael, he describes, simply and feelingly, what he saw there and why he can’t and won’t forget. “For you, history is an abstraction,” he says. “But for us, the ones who survived this century, this long, long century, there are no abstractions anymore.”

This entry was posted in Jewish, NYT. Bookmark the permalink.