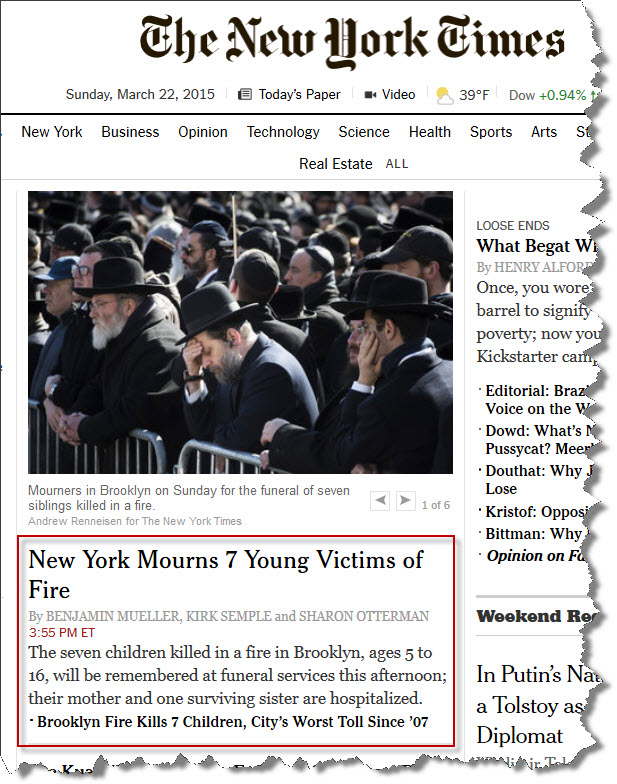 It’s a story that, as tragic as it is, is a couple days old and one that pales in scope to any number of other tragedies around the country and world.

But it involved a family of ultra-Orthodox Jews, so it gets substantial more airtime. From USA Today:

The tragedy had some neighborhood Jews reconsidering the practice of keeping hot plates on for the Sabbath, a common modern method of obeying tradition prohibiting use of fire on the holy day…

In Brooklyn, the hot plate was left on for the Sabbath, which lasts from sundown Friday to sundown Saturday. Many religious Jews use one to keep food warm, obeying the traditional prohibition on use of fire on the holy day as well as work in all forms, including turning on appliances.

The Sassoons’ hot plate apparently malfunctioned, setting off flames that tore up the stairs, trapping the children in their second-floor bedrooms as they slept, investigators said.

The children are being flown to Israel for burial:

After the funeral, mourners hugged the sides of the SUVs with flashing lights that would take the children’s bodies — accompanied by their father — to John F. Kennedy International Airport for the flight to Israel.

The family had moved about a year and a half ago from East Jerusalem, a contested part of the city where both Arabs and Jews live.

This entry was posted in Jewish, MSM, NYT. Bookmark the permalink.