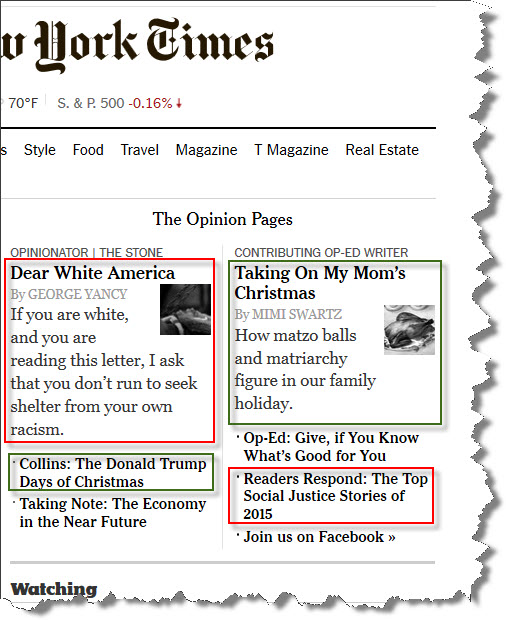 If you are white, and you are reading this letter, I ask that you don’t run to seek shelter from your own racism. Don’t hide from your responsibility. Rather, begin, right now, to practice being vulnerable. Being neither a “good” white person nor a liberal white person will get you off the proverbial hook…

As you reap comfort from being white, we suffer for being black and people of color. But your comfort is linked to our pain and suffering…

The depths to which white liberals will contort themselves, and interminably punish their very own existence, is of the sort parodied by Jonathan Franzen in his recent novel Purity. Yancey writes:

Some of your white brothers and sisters have made this leap. The legal scholar Stephanie M. Wildman, has written, “I simply believe that no matter how hard I work at not being racist, I still am. Because part of racism is systemic, I benefit from the privilege that I am struggling to see.” And the journalism professor Robert Jensen: “I like to think I have changed, even though I routinely trip over the lingering effects of that internalized racism and the institutional racism around me. Every time I walk into a store at the same time as a black man and the security guard follows him and leaves me alone to shop, I am benefiting from white privilege.”…

God, what an awful psychological space it must be for Wildman and company to inhabit. Hating one’s own existence, continually being at war with oneself… for being white.

Maybe it’s time we borrow a page from BLM: lobby for “safe spaces” for white psychological health. Such ‘safe spaces’ would not only be guilt-free, but would actually foster actual pride of one’s whiteness, history, and heritage.

Yancey, by the way, is a professor of philosophy at Emory University.

In terms of critical reasoning, that’s how low the bar is nowadays in a once esteemed humanities profession.

This entry was posted in Anti-White, Culture Wars, Jewish, NYT. Bookmark the permalink.