Lone Wolves Bumping Into Each Other

Yet another ‘lone wolf’ ready to slaughter for Islam. Describing such events as the work of “lone wolves” is like saying individual soldiers in a conventional battlefield are independently acting as ‘lone wolves’.

And so we have, now, weekly reminders of what is becoming an increasingly frequent trend.

A teenager who was on his way to behead a British soldier with a 12in knife when he was arrested, has been found guilty of preparing a terrorist act.

Brusthom Ziamani, 19, was also carrying a hammer and an “Islamic flag” when he was arrested in London, in August 2014…

Counter-terrorism police had probably prevented a “horrific terrorist attack taking place on the streets of London”.

During the trial at London’s Old Bailey, jurors were told how Ziamani had “reverted” to Islam at the beginning of 2014 and was arrested after he had shown his ex-girlfriend weapons.

The court heard how Ziamani had fallen in with members of al-Muhajiroun – an extremist organisation – after he was “kicked out” of home for converting to Islam in early 2014.

He attended the group’s talks in the basement of a Halal sweet shop in Whitechapel, London, and bought a black flag to take on their demonstrations, saying “I’m going to rock it everywhere I go in the kaffirs’ face“.

He posted comments on Facebook saying that he was “willing to die in the cause of Allah” and saying: “Sharia law on its way on our streets.

“We will implement it, it’s part of our religion.”…

The trial heard how Ziamani described Michael Adebolajo – one of Fusilier Rigby’s killers – as a “legend” and had told his ex-girlfriend how he would “kill soldiers”.

Here’s photo of Ziamani at al-Muhajiroun rally in the U.K…. with a ‘Democracy Go To Hell’ sign. 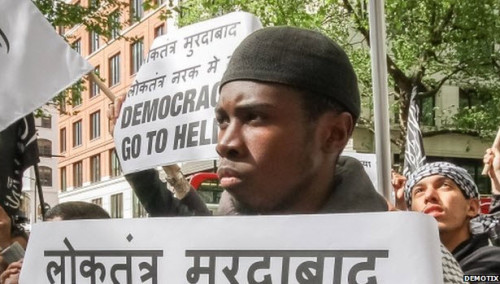 This entry was posted in Immigration, Islam, UK. Bookmark the permalink.