Merkel’s open-door, migrant policy has led, naturally, to Germany becoming Magnet #1 for yet more waves of migrants from all over the arab world… err, I mean from ‘Syria’. This, in turn, has caused additional havoc for other European countries that lie in the path of the journey. 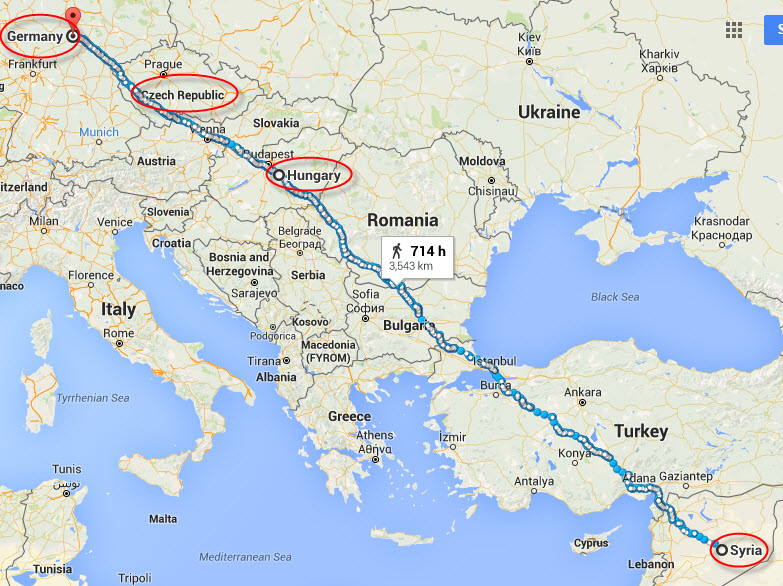 The unintended consequences of Merkel’s pathological altruism have been temporarily (and no doubt ineffectively) paused today, something of a surprise to the international community. From The Guardian:

Germany is to reintroduce border controls and will exit temporarily from the Schengen system, the interior minister has said, after the country’s regions said they could no longer cope with the overwhelming number of refugees arriving from Austria…

Germany has also stopped all trains entering the country across its southern border with Austria, the principal conduit through which some 450,000 of refugees have arrived in Germany this year…

The move comes amid extraordinary scenes at Munich’s main train station over the weekend and a growing backlash inside Germany over the decision last week by the chancellor, Angela Merkel, to allow unregistered refugees to enter the country.

Meanwhile, the Eastern European countries – who, as a whole, exhibit much more healthy senses of racial identity than does post-WWII Western Europe – are standing firm with a ‘no’:

Interior ministers from the EU’s 28 states are meeting in Brussels on Monday. They will discuss a plan set out last week by Jean-Claude Juncker, the European commission chief, to redistribute 160,000 asylum seekers across the bloc. The refugees would be allocated to each country on the basis of its size and wealth.

Germany, Austria and France support the proposal. But they face opposition from other EU states including Hungary, Slovakia, the Czech Republic and Poland. On Sunday, the Czech prime minister, Bohuslav Sobotka, said: “I think it is impossible to retreat. Our position is firm.”

Hungary’s prime minister, Viktor Orbán, has blamed Berlin for the crisis, and Merkel’s decision to open Germany’s borders. Budapest is racing to complete a fence on its border with Serbia, where 4,330 people crossed on Saturday. On Tuesday, it introduces tough laws which make crossing the border punishable with jail.

“These migrants are not coming our way from war zones but from camps in Syria’s neighbours. So these people are not fleeing danger and don’t need to be scared for their lives,” Orbán told Germany’s Bild newspaper. European leaders were “living in a dream world”, he added.

Hungary’s Orban, aside from facing Austria’s criticism, proposed that the European Union step up aid to Syria’s neighbors to stem the flow of refugees from camps there, and declared that there is “no fundamental right to a better life.”

Germany and Austria have stressed the right to asylum for war refugees but Hungary argues that most are economic migrants seeking better jobs and therefore not entitled to live within Europe. Hungary and other eastern nations have rejected proposed quotas to spread the human tide around the 28-member nations.

Hungary plans to start enforcing tougher security on its border with Serbia starting Tuesday. Asked by the German daily Bild where future arrivals should go, Orban replied, “To where they came from.”

He argued that people coming to Europe from camps in Lebanon, Jordan and Turkey “were safe there.”

Sanctimonious assertions by liberal EU figureheads, that such positions are tantamount to Nazism, ensues.