As the situation becomes more surreal, with illegals making demands directly in front of the WH (with no fear of arrest), we learn of what it will probably come down to: U.S. citizens (mainly whites) enforcing the border themselves, through militias, to stem the tide of Reconquista: 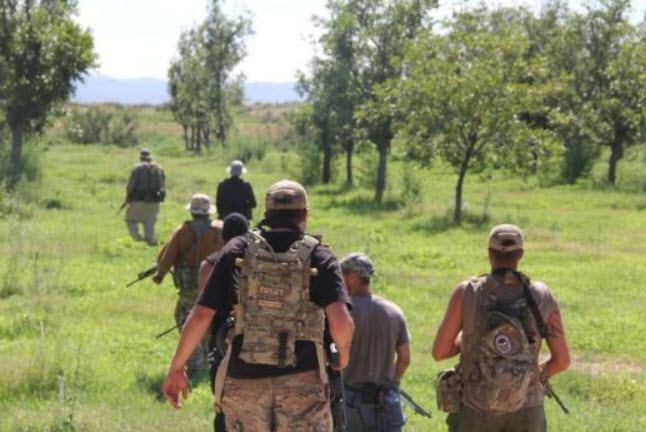 SAN ANTONIO – Photos showing dozens of members of the militia groups on the U.S.-Mexico border carrying semi-automatic rifles and wearing masks, camouflage and tactical gear provide one of the first glimpses into the group’s activities on the border.

Members of the militia groups, who say they have 10 active “teams” along the state’s southern border, are seen at campsites, walking along the Rio Grande River, pointing rifles and pistols out of frame and flipping off the camera in the photos obtained by the San Antonio Express-News.

A spokesperson for the group provided the photos under the condition that members’ faces be blurred because of fear of being identified by “cartel and gang members.”

One of the photos shows a Border Patrol agent leaning through an armed militia member’s vehicle window and pointing on a map. The U.S. Customs and Border Protection earlier this month strongly rebuked the group’s presence on the border but did not return multiple requests for comment regarding the photo.

Gov. Rick Perry, who last week ordered 1,000 Texas National Guard members to the border, declined to comment specifically on the militia groups through a spokesman but said he is “leading to secure the border.”

The groups, including Oathkeepers, Three Percenters and Patriots, began recruiting and organizing more than a month ago, as national media outlets began focusing on an influx of Central American immigrants illegally crossing the border, including more than 50,000 unaccompanied minors.

Barbie Rogers, founder of the Patriots Information Hotline, which is helping organize and recruit for the militia groups, said there are 10 “operations on the ground along the Texas border” from El Paso to Laredo to the Rio Grande Valley. Many of the groups are stationed on ranch land with permission from the owners, she said.

Some Facebook comments from members of the militias indicate the groups are not fearful of using force.

“(Rules of Engagement) is if in fear of bodily injury, weapons free, if fired upon, return fire. Real simple,” member KC Massey posted along with a photo on Facebook. “We are not worried about an “International” incident if they shoot at us.”…

Rogers called on Perry to send 5,000 more National Guard members to the border and “if cost is an issue” to “call the militia. They will come if you call them.”

I can’t wait to hear comments about this from The Organizer, Nancy “baby Jesus” Pelosi, and Patrick “Holocaust analogy” Leahy. The story does contain one Dem’s comments:

Countdown to when Eric Holder will take action against them… begins now!