This story is most interesting: 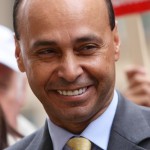 U.S. Rep. Luis Gutierrez, the vocal proponent in Congress for a change in policy that would give undocumented immigrants who were brought to the United States as minors a chance to legalize their status, has cut off ties with two groups that have coordinated provocative protests in recent months.

Gutierrez, a Democrat from Illinois, on Monday evening issued a press release announcing that he was no longer going to work with the National Immigrant Youth Alliance (NIYA) and their affiliated advocates at DREAMActivist.org.

Whoa! What would cause Mr. Amnesty to want distance himself from these groups?

The congressman said the final straw in a series of actions by the groups that he has found unsettling was the secret recording by a NIYA representative of what was to have been a confidential discussion last week between Gutierrez and parents of immigrants who are being held in an immigrant detention center in El Paso, Tex.

“It just shows me how dangerous they are,” Gutierrez said in an interview Tuesday with Fox News Latino. “How Nixonian…Why target the leading voices in the Senate and House for immigration reform?”

“That meeting was … recorded surreptitiously by NIYA, without the knowledge of the parents, the Congressman or his staff,” Gutierrez said in a statement sent Monday night to the media. “It is unfortunate that the actions of the advocates in this case are preventing this office from being able to work with parents and family who are understandably and rightly concerned for the safety of their son or daughter.”

Could it also be that Gutierrez might see the increasingly bold and antagonistic shenanigans of various ethnocentric pro-amnesty groups as holding a significant risk of backlash… by whites?

NIYA helped coordinate two high-profile protests that involved groups of people who approached U.S. authorities at the U.S.-Mexican border in July and September, and requested political asylum. The groups – nine were in the first, and about 30 in the second – comprised people who were brought to the United States illegally as minors and who were deported or left on their own.

The two groups staged their actions to protest U.S. immigration policies and to demand an end to all deportations.

All nine immigrants from the first group were released pending a final decision on their asylum claim; some from the second group have been released, others remain detained and one woman was recently deported.

The groups are known as Dream 9 and Dream 30, after the congressional measure, the DREAM Act, which seeks to provide immigrants brought as minors a path to legal status.

The following are the money-quotes:

Gutierrez has expressed exasperation for months over the high-risk moves of both groups, saying that the provocative nature of these actions undermines his efforts to win support for a comprehensive immigration reform bill.

Gutierrez said the leader of NIYA, Mohammad Abdollahi, who was born in Iran and raised in Michigan, has expressed racist [anti-white] views on the Internet, and bragged about how hard it would be for the United States to deport a gay person to Iran. [Abdollahi is himself gay – Ed.]

Gutierrez said it bothers him that someone who feels no fear of deportation is organizing people who are subject to immigration enforcement for risky encounters with U.S. border officials.

It also seems Gutierrez is a bit pissed at these two groups not giving him sufficient political ‘distance’, allowing him to continue his FNC appearances and feign concern for white Americans worried about the border:

Earlier on Monday, two of the Dream 30 who were released from detention were arrested after refusing to leave the offices of Gutierrez and Rep. Ruben Hinojosa, a Texas Democrat, whom the protesters had gone to see about immigration reform.

In a press release announcing their plans to hold a “sit-in” in the congressional offices, NIYA said: “They will go to the offices and refuse to leave until the elected officials speak out in support of stopping the deportations of the #Dream30.”

The details of the private conversation that Gutierrez said was “surreptitiously recorded” are unclear.

Gutierrez said that the meeting was very emotional, and the parents discussed things that they haven’t told others.

I do hope the secretly recorded conversation surfaces.

This entry was posted in Anti-White, Immigration, Left. Bookmark the permalink.